What are CAPTCHAs and why are they used? 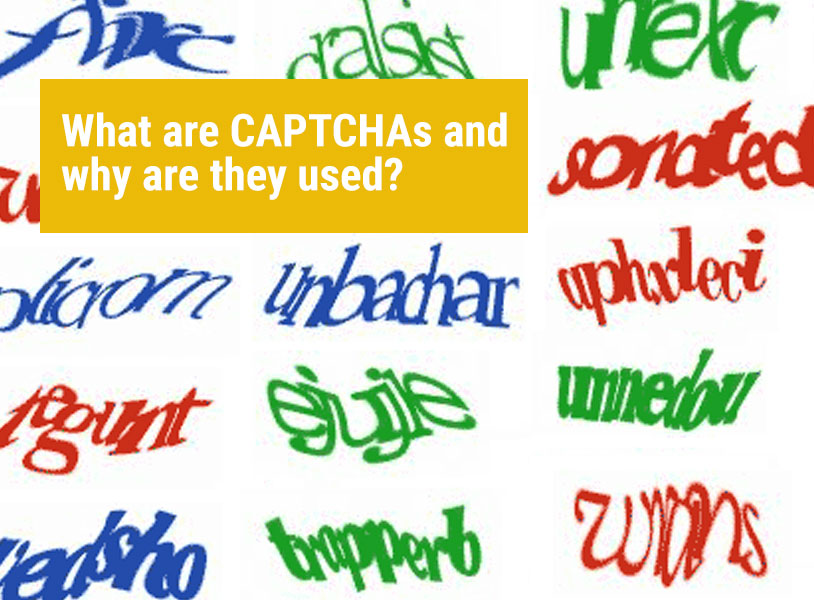 Did you ever come across statements like “I am not a robot” on a blog page where you were looking to post a comment in the comments section? You had to type out your comments and then click a mandatory tick on such a tab (“I am not a robot”) before uploading your comment. Such a tab is known as a CAPTCHA. There are many other forms of CAPTCHAs. Some are simple operational arithmetic where you have to solve the problem to make your comments live. The common ones are copying the words/numbers (or both) displayed in the CAPTCHA tab in the exact same pattern and case, and typing them out in the space provided in the CAPTCHA tab itself and clicking on “submit/send/OK”.

Some users may feel that CAPTCHAs are pretty annoying as well as a wastage of their precious time. So, why are they used? Don't you think that the website developers know that CAPTCHAs may curb the interest of many visitors to their websites by decreasing certain interactions among the community members? Today, we'll see the positive aspects and importance of CAPTCHAs in brief. But before that, we need to know what these CAPTCHAs are.

CAPTCHA is the acronym of “Completely Automated Public Turing test to tell Computers and Humans Apart”. This is basically a response test to ascertain whether the user is a human or a machine. The most typical CAPTCHA was invented first in 1997 that consisted of letters in the form of a distorted image. The distorted image serves a purpose of obscuring the contained message from machine interpretations. For example:

You have already noticed this term in the introduction section above where the full form of CAPTCHA is mentioned. What is the Turing Test? This test was developed by an English mathematician, computer scientist cum cryptanalyst Alan Turing. The test depicts a machine's capability of exhibiting intelligent behavior. The test consists of a human evaluator who would judge a conversation that would take place between a human-being and a machine. The human evaluator would know that one among the two is a machine but he would not know which one of them specifically is the machine. S/He has to guess that right. If the machine successfully disguises itself as a human, it passes the test. This can be considered a significant philosophy of AI (Artificial Intelligence).

Why they are used

CAPTCHA technology is mainly used for security reasons to block spam activities and bots that attempt to mechanically harvest various e-mail addresses or sign up automatically on various websites, blog pages, forums etc. CAPTCHA attempts to block these types of automated systems because they generally cannot read such distorted letters displayed by the CAPTCHA.

Note: CAPTCHA algorithm is open like the “P (Public)” in the name suggests. A CAPTCHA won't be vulnerable even if the CAPTCHA algorithm is cracked because the algorithm's mainly utilized to generate a random set of letters or numbers or both in the specific image. This system works efficiently since human beings and computers interpret character strings differently.

CAPTCHAs are mainly based on various tasks that include reading and typing out the displayed text in the indicated space or performing various tasks based on visual perception. These tasks used to prevent visually-impaired people from accessing such websites. It's not necessary for CAPTCHAs to be typing-oriented only. Audio interpretation of the text and speech recognition software are used for visually-impaired persons for enabling easy solutions of CAPTCHAs.

CAPTCHAs have been criticized by many people, mainly due to their distorted images that are beyond the scope of understanding of many people. These problems are mainly raised by sight-impaired or hearing-impaired persons. Other people also raise various CAPTCHA-related issues where they complain about the time taken to solve such CAPTCHAs. They reckon that this process is responsible for slowing down their work.

CAPTCHAs are mainly used for security purposes to stop spam-related activities and various automated responses from bots. But nowadays their applications are under the question-mark because modern bots are found to bypass the security measures of CAPTCHAs resulting in various types of spam activities.

You may find CAPTCHAs to be pretty annoying due to the time involved in getting a right solution, especially when time is short. You might have wondered as to why you have to carry out such CAPTCHA-based solutions when you encountered one. Now that you have gone through this article, you should know the various benefits and the disadvantages of CAPTCHAs that are already mentioned above. Considering all these things and balancing them on two hands, what do you reckon? Are CAPTCHAs less of a problem and more of a solution or the other way round? The decision rests with you.