Top 5 Enticing Future Trends to look out for in Robotics 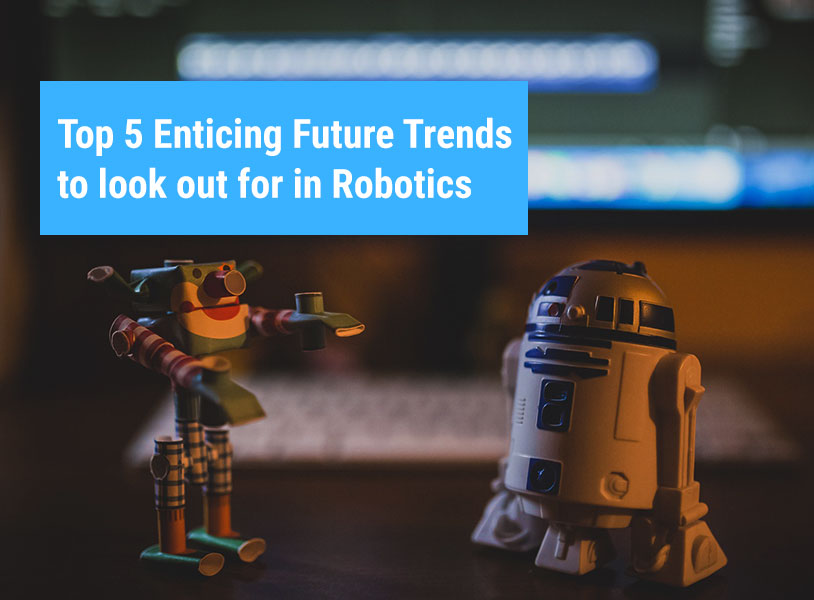 In this era, we have witnessed significant advancements in the field of robotics. This field of education has lucrative career prospects and with the passage of time, the prospects are becoming more and more enticing. It has become a standout career option for many students. We can say that the demand graph is rising and rising and maybe, one day it’ll be off the charts. So what are the future trends of this subject, say in the next couple of years? We have compiled a list of 5 enticing trends that can happen in the field of robotics. Let’s go through them.

It’s an obvious trend. We’ll just provide you with some examples. The Chinese Government has made a valiant effort to fill up the factories with advanced robots to aid the workers in the manufacturing industry. The Government hopes that this will ensure a rapid advancement in the manufacturing industry and will also fasten up the entire process through an increase in production. This project has the requirement of cost-efficient and comparatively more advanced robots and we feel that such robots will soon be implemented in the near future. We expect more and more countries following into their footsteps if the endeavor actually succeeds. We cannot say for sure whether the endeavor will succeed or not but there’s high probability that it will. Only time will tell.

This topic is mainly concerned with AI or Artificial Intelligence. Robots are considered to be successful in carrying out repetitive jobs precisely but their intelligence is still not considered to be at par with intelligent organisms. No machine has passed the Turing test (a test that’s meant to test the intelligence of machines) successfully. So basically we can say that fictitious AIs like the Skynet (Terminator series), VIKI (I,Robot) etc. are still a part of the science fiction world. It’s not that development in this field isn’t done considerably. It’s done to a fairly advanced level but that specific level cannot be considered to be the level of excellence. We hope to see more advancement in the field of artificial intelligence where robots will learn quickly and effectively from previous experience, environment and interactions.

There are a number of methods invented by the researchers and the engineers to enable robot learning. These methods undoubtedly are effective like the way AI’s incorporated in children’s toys and games nowadays, a robot toddler learns to stand on its feet by imagining the entire process on its own etc. It can be predicted that more and more advanced AI’s will crop up with the result of research and other developments. AI’s a definite hot trend in robotics and hence, a VIKI or a Skynet look-alike (in the positive sense) in the fairly near future.

This is a trend to watch out for these upcoming years. Robots may share the knowledge that they have acquired through past experiences or through any other methods with other robots similar to the way, human beings or other intelligent organisms do. Sharing knowledge is an important feature of development and is a part and parcel of civilization. We may hope to see more of this feature in robots in the upcoming years. You can go through this article for your reference to know about a specific robot that can teach another robot new tricks.

Robots are programmed to get friendlier day by day. The best thing is that the prices are coming down and hence, they are becoming more and more affordable. Hardware’s getting cheaper on one hand with an increase in the capability of software on the other. This is a good sign because it promises advanced robots at an affordable price. We can already provide you with some examples of child- friendly robots like Dash and Dot, I-Cybie, Ozobots etc . These robots have a pretty advanced AI system that can learn from interactions and previous experiences to a certain extent. These robots are also used for teaching children programming logic. So we can see that robots are being designed to seem more personal and we hope that this advancement will continue in the next couple of years bringing in more advanced artificially intelligent robots.

Surely, you’ve heard of this term- “drones”. Drones are little flying helicopter-like bots with a number of gadgets, sensors, cameras placed on top used for various activities and are controlled remotely from a distance. The thing is you have probably heard of this term in a negative fashion i.e. from the point of view of advanced warfare or in actions games like the popular Call of Duty series and the Ghost Recon series. Drones can play an important factor in warfare but we would not go into that topic. We’ll just say that we believe countries would implement more and more advanced drones to strengthen their defense system. Now let’s go to the good part. Drones are used in search and rescue operations because of their quick movement (that saves time in case of an emergency) and small size (allowing them to get into tight situations). They can also save a person’s life in tight situations. The best example is an ambulance drone that can deliver emergency medical equipments to a person who has suddenly succumbed to a heart attack. Even amazon has implemented a plan of getting product deliveries done via drones to fasten up the entire procedure. We hope that this technology will gain massive advancements in the upcoming years because of its usefulness in medical science. We should also see to the fact that this technology is implemented only for the benefits of mankind and not for its destructions like warfare and terrorism.

Robotics is seen to be an avant-garde form of education. But the subject does have huge amount of potentials in shaping a student’s career in the right path. It’s an enthralling experience to make machines do your bidding. So why don’t we gift our child a stepping stone to success? Robotics education can very well be that stepping stone to success. After all, this subject is not enclosed within a boundary of processes. The only limitation is imagination that makes this subject all the more magical.