Did you know that Microsoft started their partnership with Arduino from April, 2015? 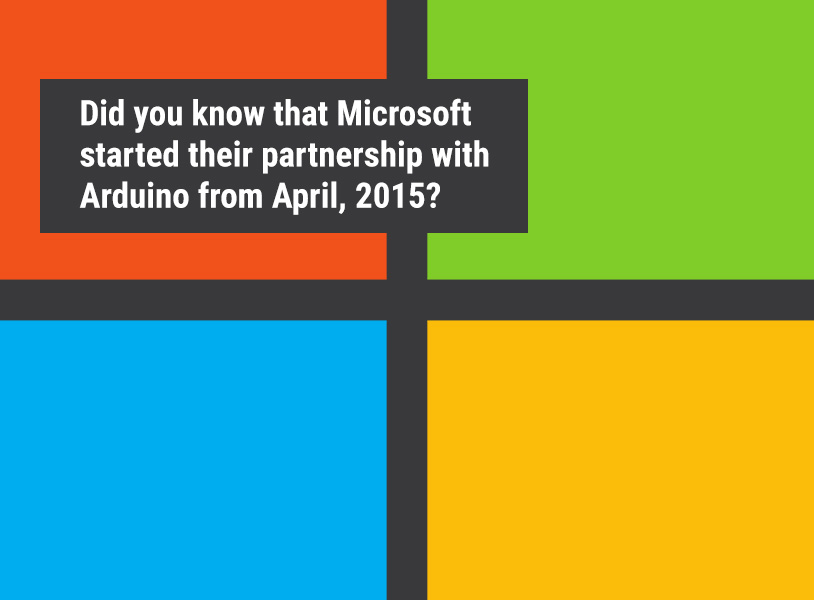 Reportedly, Microsoft's business mentality had seemed sluggish to many developers and makers before 2015. This was mainly due to Microsoft's seeming lack of involvement in supporting the Maker movement which will be capable of bringing another Industrial revolution. Microsoft began a turnaround with the introduction of their Windows 10 OS. The OS showed a number of features in favor of the Makers by supporting various external platforms. The OS also had options for further improvement after Microsoft declared that Windows 10 will provide support to holographic computing (Microsoft HoloLens). Fortunately, Microsoft did not stop there. Microsoft announced their partnership with Arduino on 30th April, 2015. This partnership confirmed the fact that Microsoft is directing their movements to the maker community and supporting the maker culture.

Windows 10 was certified to be the “world’s first Arduino certified operating system” at Build conference, San Francisco on 30th April, 2015. Massimo Banzi, one of the founders of Arduino, had attended the conference where the partnership was announced.

What did it mean?

The partnership meant that most of the projects of Arduino would be capable of running Windows 10, thereby combining Arduino's hardware power with Windows' software power. Windows 10 can be used with various devices and hence, a variety of new features would be available for possible implementation in various Arduino-based projects. This can be explained with a simple example. A camera implemented for security and surveillance can be manufactured using the hardware-driving power of Arduino and the software powers of Windows. Arduino will be able to power the controls of the motors for tilting or turning the camera. The UWP (Universal Windows Platform) of Windows can be used to make a fantastic UI (User Interface). Both the companies announced 2 open-source libraries:

With this open-source library, users can access the features of their Windows 10 supported devices wirelessly as though these devices are attached in a physical manner to Arduino shield. This, in turn, will leverage the functions of Arduino from Windows application directly.

In this manner, Microsoft's enabling the users to extend the Windows Platform apps that are Universal in nature with the commands of Arduino in a wireless manner. The users can combine the power of Win 10 devices with a number of features like image processing, cameras, speech recognition etc. with Arduino, thereby enabling the possible creation of wonderful new scenarios. You can take this example of a project where it will be possible to use Windows Remote Arduino library to switch an LED on as well as off.

This open-source library enables Arduino users to get into their Win 10 devices and explore their incredible power through the wireless protocols. The users will need the app called “Windows Virtual Shields for Arduino” for this purpose. You can examine the app details, features and can actually get the app from here. Take the example of Microsoft Lumia. This phone has various shield capabilities suitable for Arduino. This allows the makers or designers to connect those components smoothly. This means that the users will be capable of creating an Arduino-based project with the inclusion of GPS, touch technology, voice-related technologies and many more. Let's take this example of a project where the same principle is used. This is basically a weather project. A RGB (Red, Green, Blue) LED is used that is connected to Arduino. This LED is then controlled to give a weather forecast depending on a picture (a drawing).

Arduino boards are still not running Win 10 directly. These boards have the capability of accessing Win 10 devices using the two open-source libraries:

It might be possible for Microsoft to bring Win 10 IoT (Internet of Things) core to Arduino directly. Steve Teixeira, Microsoft executive, said, “There are some CPU-powered Arduino boards that are technically capable of running Windows. We are certainly looking into it."

The partnership seemed to be a pretty big move considering both the companies. Arduino blogged about this partnership declaring that it was indeed an exceptional moment for the entire makers' community. This also confirmed the fact that Microsoft is actually following the same footsteps taken by Autodesk and Google, thereby grabbing a hold on to the Maker revolution. Microsoft has decided that their success in the Maker movement area can only come from compatibility and openness. In this way, makers will discover a diversified usage of their technology. Thus, Microsoft's products will reach further to more and more customers.

Posted by FUTURITE in Robotics, After School Activities
Tags:kids, robotics