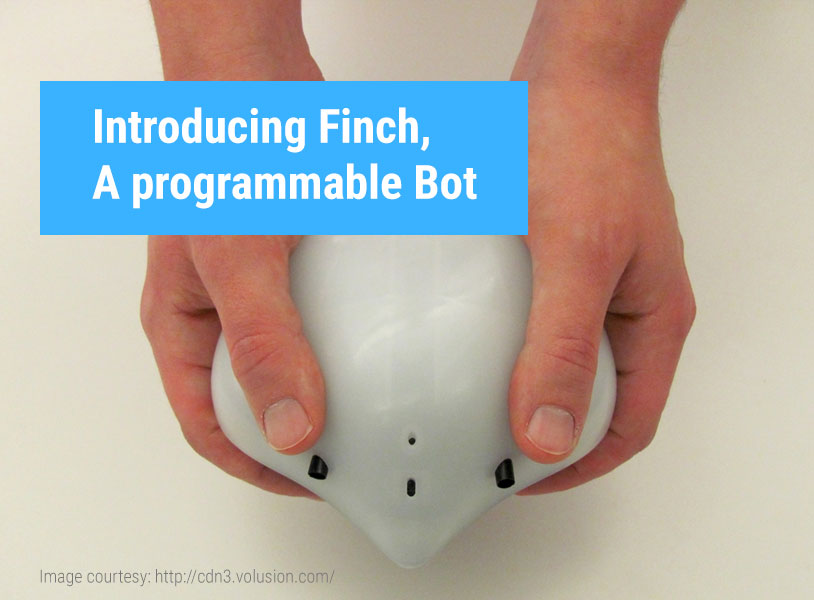 We have already discussed a number of programmable bots for children on our website like Dash and Dot, Ozobot, I-Cybie and a certain number of robots made from LEGO Mindstorms EV3. Today we’ll like to add to that list with another programmable bot which is equally effective, engaging and fun to play with. Finch is a bot that’s made specifically for computer science education. This programmable bot is virtually made for introducing beginners to programming, the same principle behind the implementation of Dash and Dot, Ozobot and so on. Finch also supports a variety of programming languages that are tailor-made for students at an increasing level of difficulty. Today we’ll discuss some important attributes of Finch and will also see the learning benefits associated with the same.

The box comes with one Finch bot and a USB cable.

The on-board features of this programmable bot include:

The bot has a structure resembling a “beak” or a “nose” which lights up in a variety of colors through the means of a LED. The mounted pen can be used for a number of drawing projects that are fun and pretty engaging. Batteries are not required for powering up the bot. An USB cable is sufficient enough for the job.  You can get the idea in detail from the picture below.

Therefore, it can be said by design that this bot is pretty simple in design avoiding the major complexities that’s displayed by other bots.

Users can use either Python or java for programming the bot. Both of these languages are versatile enough to take care of your programming requirements but there’s a catch. These languages are text-based coding languages and hence, a professional help may be required if you are a beginner having no experience of the subject matter. But there’s good news. The support of programming languages is extended and now it includes Scratch, a programming language tailor-made for children having a drag and drop interface for simple coding purposes. You can go through this short video below to see a Finch bot in action. This video should also be able to throw light on various features of Finch that are beneficial from the user’s point of view.

All software libraries that are developed specifically for Finch are open sourced. Finch supports a number of operating systems including Windows XP to Windows 10, Linux Ubuntu, Mac OS 10.6.8 and up. Some specific Finch programming environments can also work with Raspberry Pi.

The bot is not a wireless device and needs to be connected to a power source at all times via USB while it’s in action. This has a major disadvantage because it restricts the movement of the bot to a certain extent. Hence, we can say that Finch cannot perform satisfactorily to all sorts of commands programmed by the user because of this very specific issue.

We would like to say that Finch, when compared to the likes of Dash and Dot or Ozobots cannot be held in the same level as those educational because of the downsides mentioned above. Finch, being a wired bot can never respond satisfactorily to all commands. There’s always a limit involved in movement and various actions because of the length of the wire. On another hand, we should also say some good things about Finch because the project is a noble one and the effort involved deserves some praise for sure. Anything which makes the concept of programming appealing to students is a good thing and hence, Finch from that specific point of view is undoubtedly a good educational bot. Finch robot is available here. You would also see that compared to kits like Dash and Dot, Lego Mindstorms etc., Finch is relatively cheaper. We agree that those 2 kits mentioned above are more versatile and bear relatively more features but if you consider the price tag and the robustness of Finch, you can consider the same as an alternative option for your children.