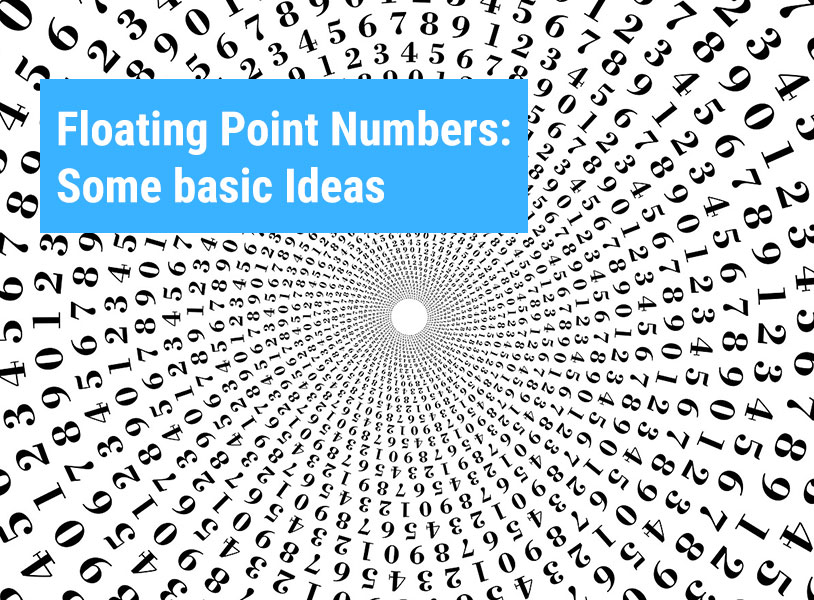 Students generally come across this term “float” in their computer programming (mainly C, C++ and Java) courses. For variable declaration prior to a code, certain data types are used like integer types (int, char, short etc.), floating point types (float) etc. Students generally have the notion that for decimal values, the “float” data type is to be used. This is correct but there are other data types present as well under the floating point category having minor differences from the “float” data type. These other ones include “double” and “long double” in C. Let's go through some basic ideas related to the floating point numbers that are useful in both mathematics as well as programming.

A number which contains one fractional (post-decimal) part where there's no limitation on the number of digits after the decimal point is called a floating point number. Some examples are 3.0, -25.52, 15.567845321 etc.

Why is it referred to as “floating point”?

It's a known fact that there's no fixed number of digits after as well as before a decimal point. Therefore, that decimal point is said to “float” among the digits. Thus, it's referred to as a “floating point”.

Why is there a need for Floating Point Numbers?

Due to the limitations of computer memory, it's pretty difficult to store numbers in the computer with limitless precision. It doesn't matter whether binary fractions are used or decimals are used. There's a limit on the number of digits at some definite point. Therefore the result of certain calculations cannot be deemed accurate. Consider these three cases:

• An engineer is involved in the project of construction of a highway. It's of little importance here whether the width of the highway is 20m or 20.01m. A relative accuracy here would work fine.

• A designer is involved in designing microchips for computers. For designing microchips, a simple one-tenth of a millimeter (0.0001m) is a massive difference. But the measurements are usually based only on lower magnitudes as the designer generally does not have to be concerned with any distance greater than 0.1m.

In case of the engineer and the designer, a certain number format is required that can provide accuracy at different magnitudes (either higher or lower). But in case of the physicist, the calculation involved contains numbers at both the higher as well as the lower magnitude.

Hence, it can be concluded that a fixed number of fractional digits and integers is not always useful. The only solution should be a format where floating point numbers are used where the number of digits after and before a decimal is not fixed.

a) Significand- It contains the significant digits of the number. Negative numbers are represented by negative significands.

Note: The decimal point in floating point numbers is placed between the first and the second digit of the significand.

The above format can:

• Allow relatively accurate calculations across numbers of different magnitudes (like multiplication of a huge number with an extremely small number).

The table below will provide you with the details like storage sizes, value ranges as well the precisions of floating-point types: