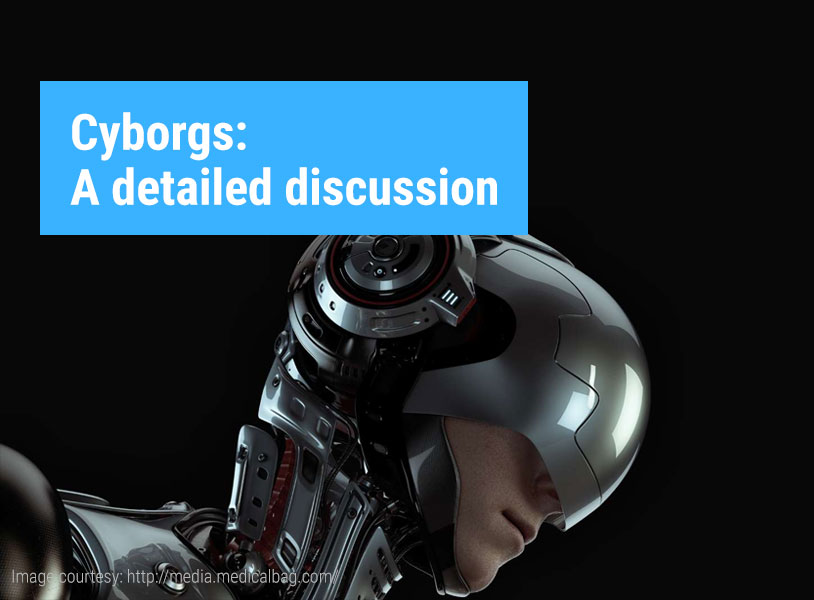 Cyborgs (Cybernatic Organisms)! We are almost certain that you have actually heard of this term due to the courtesy of movies, video games and various science fiction novels. You are probably thinking of the movie “Terminator”, the muscular Arnold Schwarzenegger playing the role of a cyborg in that film. And if you are also a gamer, you should also know about these Cyborgs in the classic “Return to Castle Wolfenstein” video game where you’ll have to blast your way to victory by defeating all these superhuman bad guys and cyborgs. The actions and the concepts portrayed in such games/movies might seem pretty enticing but in the end the verdict should be “those are fictions”. We should deal with more concrete matter. But there’s some questions that seem mighty important after such comments regarding cyborgs that say cyborgs can exist only on the page of novels or on screens. How did the term originate? How did such a concept originate? Is there any truth in the potentials of cyborgs that movies/games/novels predict it to be? This article will try to elucidate these questions as much possible but the final decision regarding the truth behind these avant-garde concepts of cyborgs rest on you.

Cyborgs are referred to those organisms that possess enhanced physical abilities or restored function due to the integration of technology or some artificial components. It’s a common tendency to associate cyborgs with mammals, mainly human beings but it’s not necessary for cyborgs to be associated with mammals only. They can be associated with any form of living organisms. We guess that the association with human beings is mainly done to make the concept more attractive from the point of view of the script or the story. The term “cyborg” was coined by Nathan S. Kline and Manfred Clynes in 1960.

The concept of cyborgs had originated much before the World War II and of course, it was limited mostly to fictions. Edgar Allan Poe, the celebrated writer of mystery and supernatural tales had used a character with substantial prostheses in a short story known as “The Man That Was Used Up”. And then many other writers followed suit. But the term was actually coined in 1960 by Kline and Clynes. They used that term to describe a physically enhanced Homo Sapien who has the capability of surviving in extraterrestrial environments. The concept originated when the hypothesis of combining the physical aspects of a human being with a machine was developed with the sole purpose of space exploration. The enhanced physical features will be tremendously beneficial for human beings because that would enable them to survive in the rugged and hostile environment of space and other planets. Therefore, we can say that the idea of cyborgs was mainly conceived from the positive point of view. But due to the negative portrayal of cyborgs in films/games/novels, many people do not agree on this. They generally think that cyborgs and warfare go hand in hand. But is it true or even partially true? We’ll try to answer the same in the later part of this article.

Use of Cyborg tissue in Engineering

Now we get into the more realistic part- the actual use of a cyborg tissue in engineering. Cyborg tissues that are structured with nanotubes of carbon as well as plant/fungal cells are used in tissue engineering to produce advanced materials for electrical and mechanical uses. This idea was presented at Material Research Society Spring Conference 2013 (refer to talk no. SS4.04). The cyborg that’s conceived by that idea is light, inexpensive as well as possesses unique mechanical properties. The cyborg can also be given a desirable shape as per choice. The cyborg tissue observed under the power of an optical microscope resembled that of an artificially made tissue that’s composed of tightly packed cells. Such type of novel engineered materials can open up a brand new path in the field of electronics. But we think that much is still to be done in this field to increase production on a global level.

The term “cyborg” generally bears an association with bionic human or other robotic implants.

There are several examples of cyborgs in prosthetics. The best example can be the C-Leg system.

The C-Leg system serves to be the replacement of a human leg which has been amputated due to injury or any other reasons. More advanced versions of C-Legs contain a number of sensors that provides a significant improvement in walking because they try to replicate the natural gait of the user, prior to the amputation. It can easily be said that the field of prostheses is the stepping stone to cyborg technology. Additional examples can be cochlear implants as well as magnetic implants. So why are we considering these supplements or enhancements as cyborgs? This is because people using those implants cannot use such senses naturally if those implants are removed.

There are some examples of usage of such technology in visually impaired persons. Direct brain implants are used for treating acquired blindness. William Dobelle was one of the first scientists in this field of technology. He came up with an idea of a functioning brain interface that’s used for restoration of sight to a certain extent.

Phillip Kennedy, a physician and a scientist, is the considered the first person who had actually designed a human cyborg. That human cyborg was Johnny Ray, who was a Vietnam vet. He had unfortunately suffered a stroke and had succumbed to paralysis. Kennedy’s experiment with a Neurotrophic Electrode restored some sorts of movement in Ray.

In 2004, Neil Harbisson, a British color-blind artist, utilized an eyeborg to discern colors through hearing.  Technically he became a cyborg because that machine gave him an extra sense thereby, enhancing his abilities.

The best example of this can be the RoboRoach which is considered the first commercially available cyborg. It’s basically a kit and was started as a crowd-funded project on kickstarter. With this kit, students will be able to use microstimulation for controlling the movements of a live cockroach for a short period of time. That means that you are actually combing an organism with that of machine and thus, it becomes a cyborg. Control the insect with a smartphone. That’s a revolutionary idea in our opinion even though it can be done for a short period of time but the implementation of such a concept can easily be considered a success.

Cyborgs are generally represented negatively by many individuals who are actually aware of such technology. This is mainly due to the fact of human enhancements in weapons technology, like we told previously that people believe that cyborgs and warfare go hand in hand. But to be honest, the research has all the potentials of getting accepted as a positive part of the society. In fact, all pieces of technology that are used in warfare promote destruction. But that doesn’t mean that we should get rid of them. It’s the “negative way” through which such technology’s used; that is the problem. The technology itself is not the problem. We would like to say the same thing regarding cyborgs. There are many positive ways through which cyborg technology can be used. But due to its immense potentials, we would say that cyborg technology shouldn’t fall into wrong hands at the wrong time. Then only there’ll be a problem; a huge problem. With that we’ll conclude our article. Hope you had a good read!