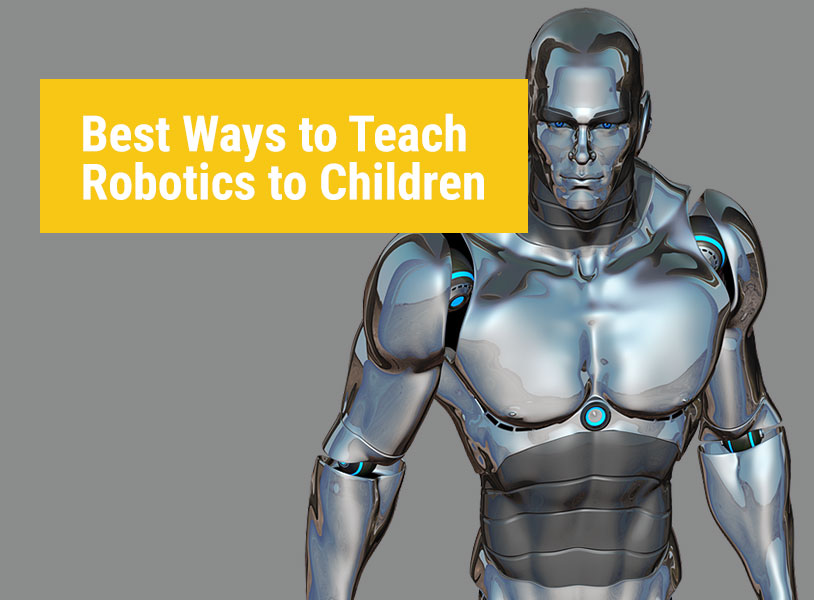 As soon as we hear the word “robotics”, we think of certain machines that are mainly humanoid (something resembling a Homo Sapien, a human being) in nature. Our mind conjures up the images of  Irona (the robot maid of Richie Rich), C-3P0(Star Wars) etc. But it's not necessary for a robot to resemble a human being only. It can resemble any living organism.

Robotics is a source of high erudition and it inspires critical thinking in children. It is an important aspect of STEM education and hence, should be included in the primary education curriculum of your children. You can go through the detailed reasons here.

Let's have a look at a number of effective and fun ways to teach robotics to children.

Organizing certain activities correlating to robotics is an effective way of developing critical thinking in children. These activities also draw their attention more into the subject matter, giving them clear ideas of certain concepts and the underlying principles. More importantly, these activities are fun and children love them. Some examples of such activities are listed below:

Senses are of utmost importance to both the humans and the robots. How can we explain this idea to the students? A simple activity is enough to convey to them this idea.

Organise your students into pairs. Blindfold one child in each pair and ask him to walk around the room, while his partner guides him through his words and also ensures that the blindfolded child remains out of danger. You should also adhere to safety measures for this activity.

After this, you can ask your students their feelings on the basis of this blindfolded activity. I am sure that they will appreciate their sense of vision a little bit more. You can then delve deeper into the comparison of the human senses to that of a robot. The questions like “What are sensors? Why are sensors  used? What are transducers?” etc.will have more weight now.

Chatbots are conversational agents. They are computer programs resembling a living organism (biomorphic image) that carries out conversation via textual or auditory methods. The best examples can be Siri(I-phone), Talking Tom(Android), etc.

There are certain chatbots available over the internet. You can check out A.L.I.C.E. for a fun and interactive chatbot activity for the students. You can easily play this game with your students on the A.L.I.C.E. platform:

Ask your students to ask certain natural questions of their choice to the bot in order to trick the bot into giving irrelevant answers. Keep a tab on the time taken by each student to confuse the bot. The student having the minimum time wins.

This activity will be the best practical lesson for your students if you are explaining to them the Turing Test. This test was developed in 1950 by Alan Turing. The Turing Test involved the implementation of Artificial Intelligence equivalent to that of the intelligence exhibited by living organisms. The machine would be deemed artificially intelligent if it successfully passed the test. A human evaluator would question a machine and a human. He would be aware that one of those two is a machine but he wouldn't know which one actually is the machine. By studying the answers from those two, he would judge which one is a machine and which one is a human. If the machine successfully disguises itself as a human, it passes the test.

Science fiction novels, TV shows and movies have one common factor: Robots. Pick out examples like T-800 and T-1000 (The Terminator), Autobots and the Decepticons (The Transformers) etc. and ask your students to distinguish between the heroes and the villains of those robots.

Ask your students the possibility of designing a robot performing tasks similar to that of a human. Start with a simple example. Tying shoelaces. It's easy enough. Let them try tying their shoelaces with pop-sickle sticks fastened to their thumb and index finger. The task will then be more difficult.

It is similar in the case of robotics. Designing robots that exhibit high dexterity is still uncommon.

LEGO Wedo is a combination of software. Legos and real-world projects. It is one of the best available kit to teach robotics to students belonging to the age group of 7-10. The LEGO Wedo kit is suitable for providing hands-on lessons in the form of combined hardware cum software implementation of robotics to the children. It's more than forty hours of learning. The software is a complete GUI (Graphical User Interface) and has a drag-and-drop feature for implementing code snippets in a particular program. This is beneficial in teaching primary programming concepts to the children. By implementing and modifying various codes, the students will be able to modify the robot as per their likings. Futurite offers a course called “BEGINNING ROBOTICS USING LEGO WEDO” that is based on the same thing.

LEGO Mindstorms EV3 is the latest in line of the LEGO Mindstorms series. It is referred to as the 3rd generation kit in this robotics series. The “EV” refers to “evolution” and “3” signifies that it is the “third generation” kit. It is suitable for children above the age of 10.This kit can be used by the students to construct, program and try out the end result on the basis of robotics technology in real life.

The major parts that it contains are-

The kit has several key learning modes. They are:

There's a course called “INTRODUCTION TO ROBOTICS USING LEGO MINDSTORMS” at Futurite that puts stress on the same matter.

Robotics is generally seen as an extravagant form of education but the amount of prospects in this field are immense. The main thing that we should keep in mind while teaching this subject is to retain the passion for learning in our children's minds, to keep their curiosity alive. This subject is fun as well as fascinating. We should try to keep it that way.