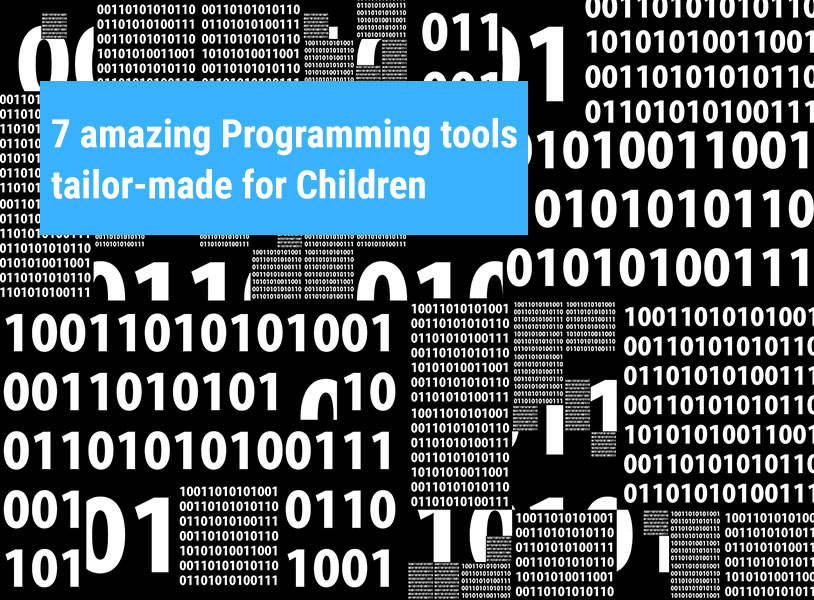 Programming has become an important part of basic education. In this modern era, electronic gadgets have become a part and parcel of our daily life in the form of smartphones, tablets, computers, smart TVs etc. Children are becoming more and more tech-savvy with the passage of time. It's therefore necessary for them to understand the working principle of these gadgets. Programming knowledge has gained immense importance which can affect your children's career positively by making them standout candidates. Hence, it's necessary to introduce coding to them from an early age to make them expert professionals in future. It should be seen that coding is introduced to children in a fun and effective way and not in a procedure-oriented manner that children may find least entertaining. There are certain programming educational tools that do this job effectively. Let's go through some of them.

Hopscotch is the perfect tool to get your children start with programming. This app can be used by anyone irrespective of age. Hopscotch allows the users to develop stories, animations, games and various other interaction-based programs. The users can drag and drop code snippets to develop such programs. Hopscotch is available for free on iTunes. More details about the app can be found here.

Scratch is designed by the Lifelong Kindergarten group, MIT. Scratch is a free programming language suitable for students, teachers, parents etc. to create games, animations and various programming based applications. Scratch is free to use and is immensely beneficial for children because of it's simple. attractive as well as interactive platform. Scratch users can share their projects with other users around the globe through the Scratch online community. You can go through the details of Scratch over here.

This is a free programming app made specifically for iPad and Android. The tagline of Kodable reads “Learn to code before you know how to read”. This tagline itself proves the fact that this app is particularly suited for beginners who want to start off with programming. Kodable teaches programming concepts to children through fun games and activities. Kodable is tailor-made for children belonging to the age of 5 and up. Children learn programming concepts by playing various games with minor instructions. Kodable has three levels of coding that are:

Kodable can be downloaded from iTunes and Google Play.

Stencyl is a free, fast as well as convenient programming app. Stencyl allows the users to develop games via drag and drop interface. No direct implementation of code is necessarily required. If the user doesn’t want to implement drag and drop of code snippets, s/he can implement direct code as well. Hence, it can be deemed as versatile enough for both the beginners and the professionals. Stencyl can be used on Windows, Mac and Linux. Stencil can be downloaded from here with the options for Windows, Mac and iOS. You can choose any one among them as per your requirement.

RoboMind is another programming tool suitable for children that uses its own unique language known as ROBO. It’s a simple language that doesn’t need any previous programming knowledge. The users have an objective to be fulfilled that is to make a virtual robot move on a 2D grid and accomplish various simple tasks. Through RoboMind, children will be able to know the very basics of AI (Artificial Intelligence). This knowledge can then be used in various real robot kits such as the LEGO Mindstorms kits etc. RoboMind can be downloaded from here. You’ll provided a 30-day trial version free of cost and after that a certain amount needs to be paid for further uses. The details can be found on the same page from where it’s downloaded.

Etoys is a convenient and easy coding tool that’s used by children to create games, stories, models etc. Etoys projects can be made through the use of graphics, music, sound, animated objects, scanned pictures, text etc. Etoys is a free programming tool. You can go through the details here.

Computer programming has become an integral aspect of basic education and is implemented in leading schools’ curriculum. It should be seen that this subject is not taught in a procedure-oriented manner because coding is not a subject that’s based on procedures. It’s a subject where the students have the opportunity to unleash their creativity, tweak with various features of a code as per their necessity and have fun while doing the same. Afterschool coding classes can also be quite beneficial for children to delve deeper into the subject matter. Programming is deemed the future and considering the career potentials that this subject has, it can be said that this subject can be the stepping stone of a child to a successful career.