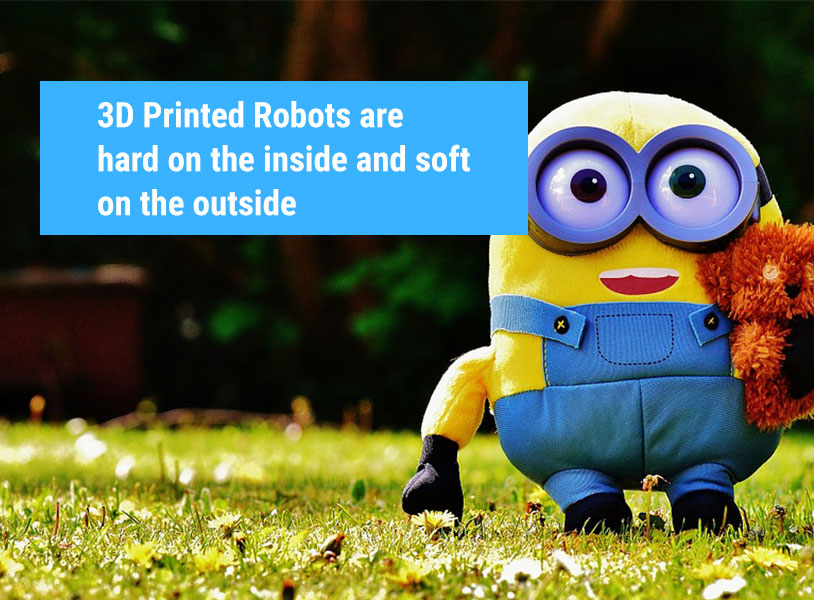 Engineers at the University of California (UC), San Diego and Harvard University created a robot having a 3D printed body that has a rigid core and a soft exterior. So why is it unique? A soft exterior makes it look more like a human. Say for example, you have a robot working at your workplace and you accidentally brush against its exterior side and you feel the cold, hard metal. Will you feel comfortable about it? We will presumably say a “no”. Now this 3D printed robot has a soft exterior that can solve this problem to a certain extent. There are many other advantages as well. We’ll see to that in this article in more detail.

Soft outside, hard inside is a concept that does bear much weight these days especially when you consider humanoid robots, a robot that resembles a human being. Now the resemblance should not be only in looks but also in feelings as well as in action. The robot will not only look like a human but will also feel like a human; at least that’s the idea. Thus, this project is conceived where a 3D printed robot has to be made by applying the same principle in action.

The basic idea behind this project is said to have been originated from nature. The researchers behind this project believe that blending soft and hard components for creating a brand new generation of robots will make these robots more agile and robust, thereby making them more suitable for intricate jobs in harsh extra-terrestrial environments. Such intricate designs improve the dexterity of these robots making them capable enough of performing delicate tasks as well. That manufacturing process can only be done through the implementation of 3D design and printing.

Michael Tolley, the assistant professor of ME (Mechanical Engineering) at University of California, San Diego said, “The idea of blending soft and hard materials into the robot’s body came from nature. For example, certain species of mussels have a foot that starts out soft and then becomes rigid at the point where it makes contact with rocks. In nature, complexity has a very low cost. Using new manufacturing techniques like 3D printing, we’re trying to translate this to robotics.”

Take a look at the appearance of the robot depicted in the image below.

The robot consists of 2 nestled hemispheres. There’s a structure resembling that of a half shell on the top hemisphere (refer to the image above). That shell is 3D printed having 9 different layers of rigidity. The structure is created in a manner that goes something like having a rubber-like flexibility on the outside to a complete rigidity on the inside. In simple words, soft outside, hard inside.  Several versions of this design were tried by the researchers and the conclusion that’s drawn said that a completely rigid top would make a robot suitable for higher jumps. But what about landing and surviving the impact of the jumps? For surviving the impact, a flexible top needs to be used. A flexible top would survive the impact to a maximum level and hence, that will increase the durability of the bot and will also make the bot reusable. Thus the flexible design is used. This short video below can also explain this to a greater extent.

The bottom part of the robot includes one small chamber where two gases namely oxygen and butane is injected for jumping purposes. After igniting the gases, this part behaves similar to that of a basketball. This causes the bot to inflate instantaneously, propelling it into a jump. After exhaustion, the bottom hemisphere goes back to its initial shape. We have provided a step-by-step representation of its working in the image below for your reference.

This short video depicts the bot in action.

The main challenge of this project was the availability of materials for 3D printing the bot. It was informed that the specifications that were provided by the manufacturers were not so detailed. Hence, they had to opt for a tiresome trial and error method. They used each and every material to print out individual samples with the sole purpose of testing the accurate stiffness of those 9 layers present on top of the robot. That feat was challenging indeed and the effort is surely worth the praise.

Robotics is a fascinating subject and do bear enticing career prospects. Education in the field of robotics can make someone stand out from the crowd especially when the career is brought into question. After school robotics classes can be considered a good platform for gaining entry into this avant garde form of STEM education. That’ll surely be beneficial in the long run.