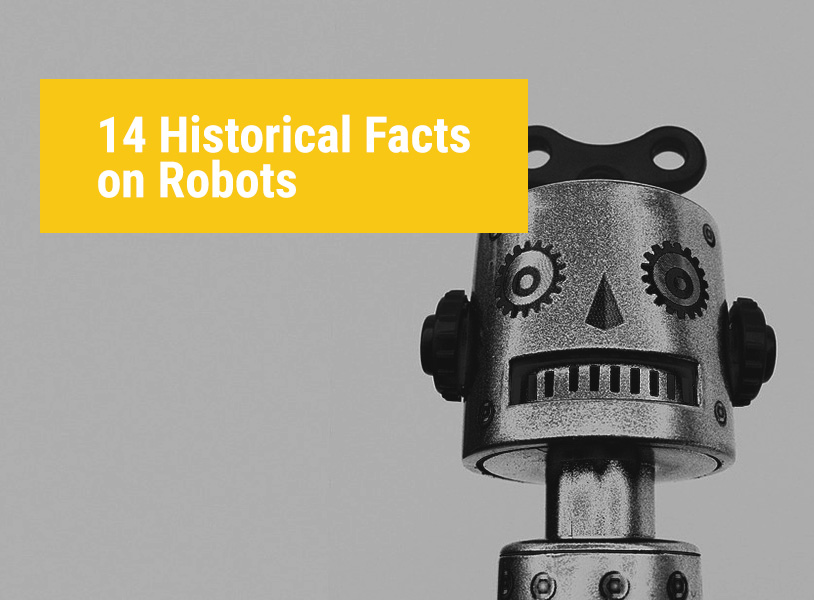 What do we think when we hear the term “robot”? We immediately visualize “robot” from the humanoid point of view. We believe that a robot is a machine resembling a human. We also like to believe that the robot acts like a human being performing various tasks. It's not necessary for a robot to resemble a human being only and perform tasks that only a human being can do. A robot is basically a machine that performs actions that are usually performed by any living organism. Robots are much faster and can perform those tasks tirelessly.

But can a robot think? Can a robot have emotions? There are numerous such questions. Let's keep those questions aside for this moment and go back in time to see some interesting historical facts on robots.

Leonardo Da Vinci sketched his own version of a humanoid robot like the one depicted in this picture. This sketch was truly futuristic. Presumably, the robot could walk, sit and had the ability to move his jaws. A system consisting of pulleys and gears was used to drive this so-called robotic knight.

Juanelo Turriano, an Italian inventor created an automaton resembling a lady playing a mandolin or lute. The automaton is of the height 44 cm. The figurine has lost its functionality now. It is said that it could actually hop around, move its head sideways that is left and right, and could play the lute as well with its right hand. It is in a museum in Vienna.

“The Duck” was a famous creation of Jacques de Vaucanson. This device was fully mechanical and could perform a number of functions like flapping its wings, ‘eating and digesting’ grains etc. Sadly, the original mechanical duck has got destroyed.

4. Joseph-Marie Jacquard created a Mechanical Attachment to a Loom

Joseph-Marie Jacquard's attachment to a loom was designed in a manner that could have been programmed to produce intricate designs for printing onto a cloth or a tissue.

5. First Usage of the Term “Robot”

It is said that Karel Capek, a Czech writer, first used the term “robot” in his play named “Rossum's Universal Robots or R.U.R.” The plot was not very complex. Human beings created machines called robots to make their lives easier. These robots gained in power and finally dominated the human race. Then, the human race was threatened with extinction which was finally averted.

The term 'Robot' comes from the word 'Robota', a Czech word. This word means the implication of labor that is forced.

Westinghouse made ELEKTRO, a robot that was in the form of a humanoid in its facility in Mansfield, Ohio. ELEKTRO was 7 feet tall with a weight of 265 pounds (120.2 kg). He could speak, walk on voice command, inflate balloons, and move his arms and head.

Asimov added another law in his later fictions, also known as the fourth law or the zeroth law. It said that-

“A robot may not harm humanity, or, by inaction, allow humanity to come to harm.”

A paint-sprayer was designed to be the first “codable or programmable” mechanism. Williard L.V. Polard designed this mechanism for DeVilbiss Company. The patent was approved by US, and the patent number was 2,286,571. The diagrammatic representation of the mechanism can be seen here.

Elmer and Elsie were the two bots resembling a turtle. These two bots were created by W. Grey Walter. These bots had the capability of locating the charging stations when their charges ran low.

George Devol designed a robot that had the name UNIMATE. This robot was suitable for “Universal Automation”. (US patent no.- 2,988,237)

Stanford Research Institute (SRI) developed a mobile bot having a system of vision that was controllable via a computer having the bulk of a large room. This robot was named “Shakey.”

The first Intel 8080-chip-based computer was MITS ALTAIR. These computers are plausibly considered to be the beginning of PC (Personal Computers).

Hitachi Ltd. developed a biped robot, WHL (Waseda Hitachi Leg)-11. It had the capability of walking on flat surfaces. It could turn as well. A detailed history of Hitachi robots including the WHL-11 can be found here.

LEGO released their Mindstorms series, a kit used for inventing various designs of bots by the users using the LEGO bricks.

The time-line of robots is certainly not limited to these 14 facts only. There were countless incidents in between. We are throwing light on these 14 incidents known to us as per our information gathered, that we think hold much importance and could prove to be interesting, and inspiring. Thus concludes our trip down this history lane.