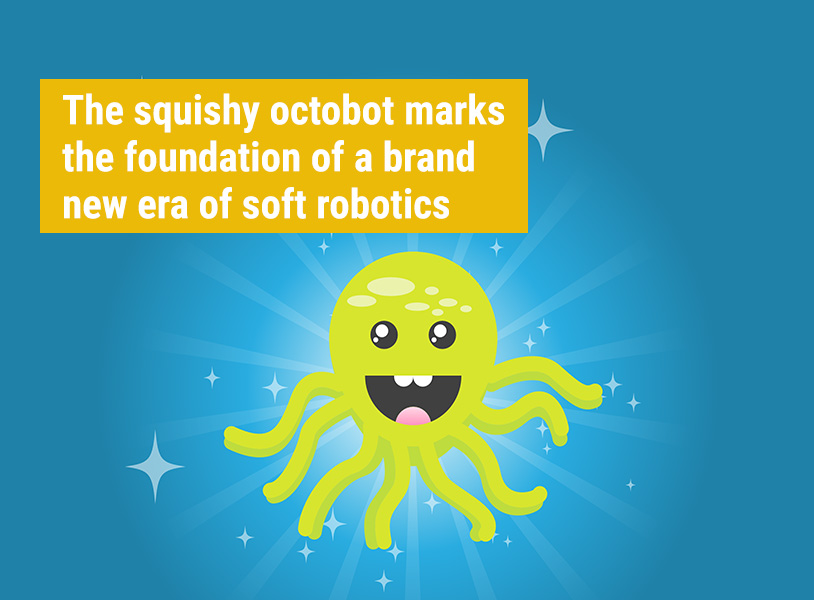 So finally! There it is- the squishy octobot, a robot considered to be the world’s 1st soft and solo robot.

Ditching all conventional power sources and electronics, this flexible robot can operate without rigid parts. The octobot as described in Nature is considered to be the first self-contained robot that’s made exclusively of flexible, soft parts. So let’s go through an overview of the octobot without further ado.

The interest in soft robots actually kicked off when engineers started thinking about designing bots that can get into tricky spots and tight spaces. The engineers also wanted to design specific robots that can safely handle delicate objects.

Such bots will be extremely useful in search and rescue missions especially in the case of natural disasters like earthquakes where people might get trapped in various tight spots. Another goal is that to design bots that can wriggle into awkward surgical places carrying out intricate surgeries. Therefore, there’s no doubt that this project was of considerable significance.

The main challenges were designing the key components of robots from soft materials. The key components including the electronics, the processing units, the batteries etc. are usually pretty hard and aren’t flexible enough to serve the purpose. The trick was to design them from soft materials. There’s no doubt that this was a tough challenge faced by the engineers but finally, they triumphed over all the odds. Thus, the octobot came into existence.

The robot is made from silicone gels with a variation in stiffness. The robot is powered by a specific chemical reaction that injects gas through chambers located in its rubbery legs.

The unique design of the robot makes it possible for it to have no battery or wires.

The octobot’s made of silicone rubber. The “brain” is a pliable microfluidic circuit that helps in directing the flow of fuel through channels through the use of pressure-activated valves and switches.

“It’s an analogy of what would be an electrical circuit normally,” says engineer Robert Wood at Harvard University in Cambridge, Massachusetts, one of the study’s leaders. “Instead of passing electrons around, we're passing liquids and gases.”

The circuit is designed in a manner that sets up an alternating form of movement. The bot raises 4 legs and lowers the other 4 at the same time, then swaps.

The process starts off when the engineers inject fuel into 2 reservoirs. Each reservoir is dedicated to a group of 4 arms. These reservoirs enlarge like balloons and push fuel through microfluidic circuits.

Change in pressure occurs with the flow of fuel through the circuit. This closes off certain control points and opens other specific points, restricting the flow to only a half of the system at a specific time. As a side consumes fuel, the internal pressure of the same side decreases; permitting fuel to enter into the other side; as soon as the fuel enter into the otehr side, the initial side gets pinched off. This cycle continues throughout its action.

Take a look at this short video below to see the bot in action.

The fuel is basically a 50% hydrogen peroxide solution. When the solution is exposed to platinum (which is infused into 2 segments of the octobot’s internal network), it quickly decomposes into greater volume of oxygen and water. This result in a sudden burst of pressurized gas in each segment of the bot thereby, inflating a set of arms and finally exiting though the exhaust.

The octobot has the capacity of running for up to 8 mins on 1 ml of fuel.

Why’s the prototype shaped in the form of an octopus?

The prototype’s basically a tribute to the animal. It may look pretty strange to you but the engineers felt that the organism that complimented this project best is an octopus. The octopus is devoid of a skeleton but is also remarkably strong and is also capable of intricate movements.

So we hope that you are pretty enthralled with this novel form of robot. That should be all for now. Hope you had a good read.