Tactile Intelligence can be considered the future of robot grasping 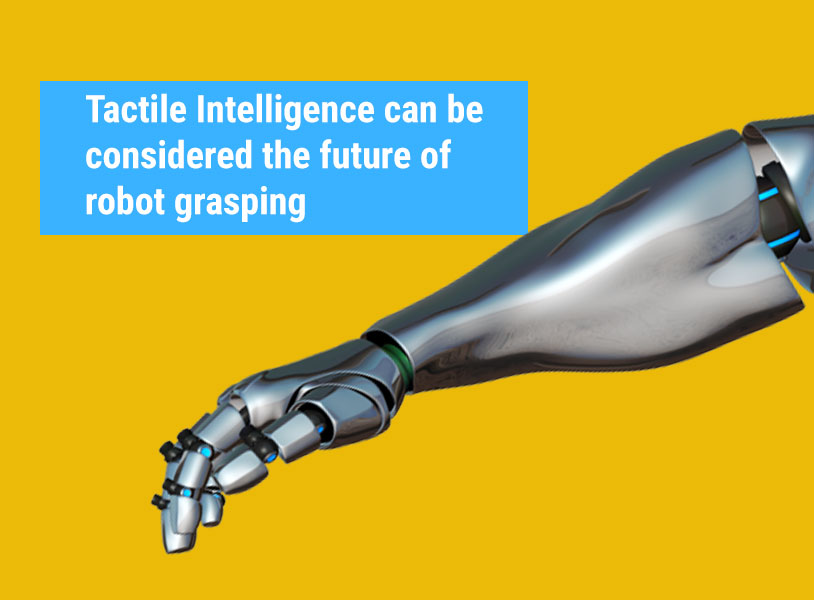 You have probably considered a task like picking a pen or a pencil or almost anything with your hands simple enough to give it a thought. In fact, these actions have almost become a part of your reflex action according to situations. But that task is not as easy or simple like he way you probably think it to be. Our body is an exquisite machine that’s dexterous enough to perform such complex tasks. Why are we calling such tasks “complex”? That’s because robots cannot do such tasks with ease. Even various organisms fail to do that with ease as per precision. We are lucky to possess such dexterity. Tactile intelligence is an exceptional feature that can improve the dexterity of such robots. This article will try to discuss it in more detail.

Most robots have the ability of performing “blind grasping”. It’s almost obvious because of the lack of developed senses in its limbs resulting in a lack of dexterity. Their effectiveness is limited. For example, a robot will be effective only if it can pick up a specific object from the same location. But a slight change in conditions can alter that effectiveness to a great extent. If anything like the shape, location or texture of the object that’s needed to be picked up is changed, the response of the robot might also change. In fact, there’s high probability that the grasp will fail.

This question can be answered effectively with the slight reference of human grasping. Human beings apply a combination of senses to perform such tasks. The primary senses that find application are visual and tactile. Now the second sense is an issue particularly when robots are concerned. All advanced grasping robots are generally developed by keeping the sense of vision in focus. The tactile sense is ignored either because it’s too difficult to implement or it’s just seen upon to be pretty frivolous. Hence, the action becomes very difficult from the point of view of robots because it has to base its actions only on vision alone. Vision is undoubtedly pretty important to perform grasping tasks but at the same time tactile sense is also of utmost importance.

A simple example can clear this thing up. Consider picking up a simple thing say, a milk carton or a pencil. You implied your vision to locate the object and now it’s time to pick it up. Just remember that a slight change in pressure can cause a spillage of milk or it might also drop the carton or even crush it in if you press it too hard. You have to pick it up using the exact precision accordingly. That’s where your tactile sense comes in and you complete the task successfully. You’ll know how important it is if you consult our opinion with that of an amputee. You know what’s their biggest frustration is? It’s the lack of sense in their limbs. They can use their prosthetics to the best of their abilities but the lack of sense is still there. The grasping is where the robots make a mess since most of them do not possess that exact sense of perception.

The sole focus on vision while grasping objects raises a number of issues. Firstly, vision possesses a number of technical limitations especially when light conditions are concerned. If the object’s placed in dark, the robot will face a difficult time while picking up the object if it depends only upon its sense of vision. Secondly, if there’s a scenario involving a hard-to-see object, the robot will drastically fail in its attempts. Lastly, grasping tasks are least dependent on vision and are dependent mainly on contact and forces. Those two tasks do not involve the sense of vision. Let’s take the example of a more complex task say, picking a dust bin. The robot has to pick the bin up, uncover the lid and then clear the waste. That’s a whole lot of task indeed that cannot depend only on the sense of vision. Hence, tactile sense is undoubtedly very important.

Researchers are aware of the concept of a tactile sensor which would be capable of grasping items effectively. That tactile sensor should have the ability of replicating the human mechanism of grasping objects. But that sensor does have a catch. The signals sent by the tactile sensor are pretty complex in nature. Therefore, these signals do not often translate into enhanced grasping abilities. An upgrade is needed which should be able to transform such low-level data into high-level information resulting in better grasping coupled with advanced manipulation. Only then the success will come because such a technology bears the potentials of giving robots the ability to predict the probability of grasp success through touch, comprehend the probability of object slippage as well as identify objects on the basis of their tactile signatures. That’s the principle behind the development of the robotic hand (manufactured by Robotiq) shown in the image below.

The research is still ongoing but the potentials are extremely huge in this tactile intelligence technology. We can confirm the fact that no action can be done on the basis of a single sense. The Coordination between senses is very important to achieve a task however small it might be. We are still far away from the day when the robots will be able to identify objects on the basis of touch itself. But if that day do comes, these tactile engineers will have to be given a big chunk of the total credit.