Root, a novel bot capable of teaching code to children 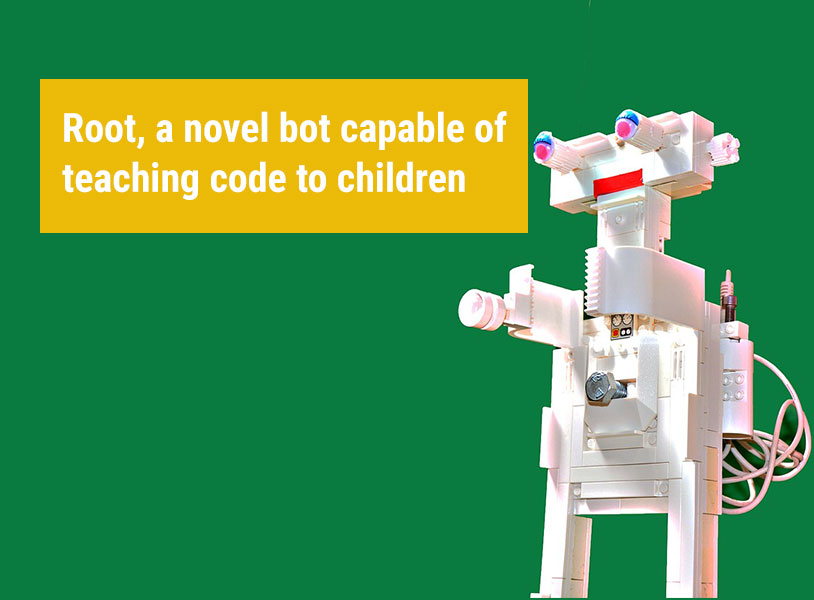 A robot that can teach coding or programming to children in a fun and effective manner. Nothing new, right? You have heard of such bots like Dash and Dot, Ozobots, Finch etc. You are probably also aware of the Lego Mindstorms kits that are used to design various bots as well as program them to make them perform certain tasks as per choice. Root is another bot that also comes with the same objective. But there’s one thing that makes it a stand-out among the crowd. We’ll come to that stand-out feature later in this article but for now let’s start with our discussion on this wonderfully simple and intricate programmable bot in a systematic manner.

The Root bot in action

The bot has several abilities. We have highlighted some important ones for your reference. Let’s go through them.

The bot is designed to be fitted into every classroom. This bot has a special feature that makes it a standout one among others. We have mentioned the statement that it’s a standout one on the basis of a standout attribute. So here it goes- The bot has the capability of driving automatically as per program on a white board and drawing various shapes and figures on the same board.

Programming with Root has no requirement of a special setup. Coding with root provides an inherently positive as well as a fun learning experience because the students are virtually doing anything with the bot to make it do their bidding. They might improvise using trial and error methods to increase its functionality. The experience is extremely gratifying.

The price of the bot is also said to be pretty reasonable enough in comparison to other similar intricate educational bots and that’s an important factor to be taken into consideration.

What can be done with Root?

The bot can be used to draw a design resembling a race track on the white board. These bots can also be used to race each other. There are several other fun options. These options include one specific option to program Root to speed up when it’s driving over the green color. It also includes an option to make the bot come to a stop as soon as it senses the color red.

Root can be instructed to flee on sensing a danger. The danger can be a light beam from a flashlight. Similarly, there are many other options. The limitation is your imagination. Think, program and execute the result with a root. If you successfully write the code, you’ll definitely see the desired result on your whiteboard or on your desk.

To know about other technical details, you can check out the Root official site.

We would say that this robot has tremendous potentials to ignite a student’s passion in programming. But we think that there’s a minor drawback involved in the design of this bot. It doesn’t look very catchy to attract the attention of a kid. There’s no doubt that it’s effective with some novel features but regarding its design and the looks, we would like to say that it’s far too simple. Well, that’s entirely our view point and you may disagree with us for sure. Anyway, we feel that bots like Dash and Dot, ozobot etc. have a far superior design in comparison to Root. Root is said to be available for purchase from early next year. If you feel that this bot satisfies all your coding requirements for your children as well it’s reasonable enough considering the price tag from your point of view, you can give it a go. After all, anything that blends robotics education with that of coding deserves to be praised.