Robot performs medical operations from the inside of a human body 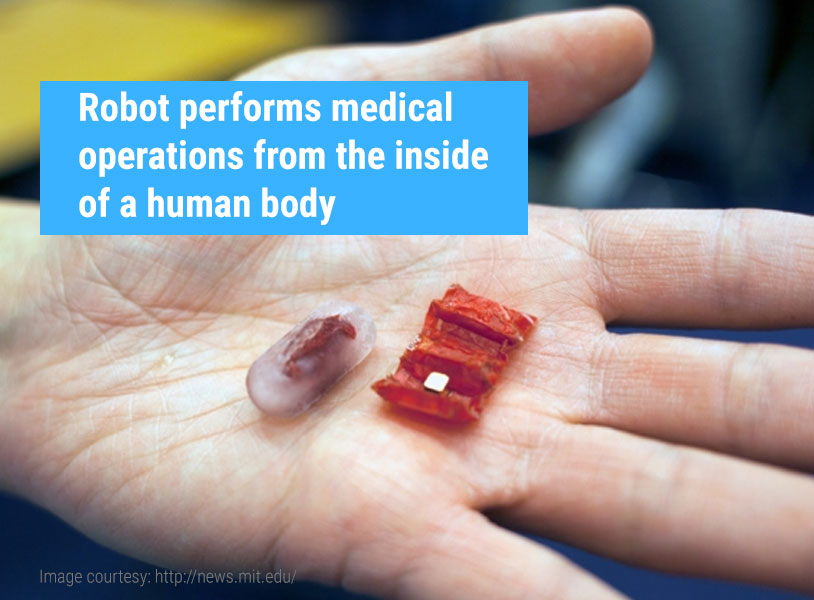 You have probably heard of the term robotic surgery. A surgery that’s performed with the help of a machine or more specifically a robot. But that was one thing. We thought that the progress in the field of robotics will bring in more advanced robots for medical operations from the external point of view i.e. the robots will perform operations from outside of a body. This means that incision and other technicalities will surely still be functional. But did we ever think of a possibility in which a robot will be able to perform such intricate surgeries from the inside of a body? It certainly was a goal of many researchers to use robots in medical surgeries to minimize bloodshed and quicken the entire process including the part of healing. We thought we’ll believe the hypothesis after we’ve seen this project’s functionality from reliable news sources. And then suddenly this news crops up where this project has actually gained its functionality and has passed all the required tests. Today we’ll see the wonders of this technology in medical science that’ll surely be beneficial in the long run because it opens up a lot of possibilities for more advanced research in medical science.

MIT’s electrical engineering and computer science department described the functioning of this tiny robot in the simplest manner that can be comprehended by anyone including a person having no background in science. The patient just has to swallow the robot orally to kick start its functionality. The robot would be concealed in a dissolvable capsule that needs to be ingested by the patient. After that, the robot will be able to perform the specific actions required for that medical surgery. It’s quite simple from the point of view of patients. We can’t say whether it’s simple from the point of view of the doctors or the professionals who’ll supervise the entire surgery but you don’t have to worry about it. After all, they are professionals having a good enough experience of the subject matter.

The robot will be steered inside the body to specific locations through a magnetic field. It has the capability of crawling across the walls of the stomach and patch internal injuries and other wounds. It will also have the capability of removing foreign particles inside the body that are accidentally swallowed or has got in through any other means. Hence, it’ll be perfectly suitable for children who have come up with an unfortunate accident of swallowing small toy parts and accessories like batteries. It’s a common case in the US where there are roughly around 3500 cases of ingested batteries. Seemingly, the entire process is relatively painless involving no bloodshed because of the non-involvement of incisions when compared to that of the traditional surgery methods used in these cases.

The surgery occurs in the manner. At first the tiny robot is introduced into the body. It will then navigate to the intervention site, fold itself up and perform the assigned tasks. The robot will then be directed to the intestines for its final removal through excretion.

The researchers performed the test with an artificial food pipe (oesophagus) and a silicon stomach. The robot that was injected into the carefully designed artificial system mentioned in the above statement was controlled with magnetic fields externally. The robot was mainly used as a foreign object retriever which in this case is a battery. According to the result of the test, the robot could latch onto one button battery using its built-in magnet. The robot was then guided to the intestines for final removal. The idea behind the removal would be the body’s normal excretory functions that’ll automatically eject the robot from the anus. The researchers followed this test with another experiment where they sent another robot carrying medications to specific locations for healing internal injuries. The experiment was conducted successfully by the team and it was reported that the one complete procedure could be done within a mere 5 minutes.

You can go through this short video to get a detailed idea of the underlying principle. The entire experiment is explained in Layman’s term by various professionals and experts in this field of science. You’ll also be able to guess the future copes of such an intricate technology.

The fantastic voyage robot is yet to be tested on human subjects. But the effort made in this field of science is praiseworthy.  It can be estimated that this project would pass all rigorous human subject tests in the field of medicine. After that, we are pretty sure that implementation of such an intricate technology will gain immense popularity in medical science. There’s no doubt that in this case, the researchers have strived hard to bridge the gap between medicine and intricate robotics. After all, steering a tiny robot inside a human body to perform various desirable medical operations is no mean feat.