RoboBee, an insect-sized bot capable of swimming and flying 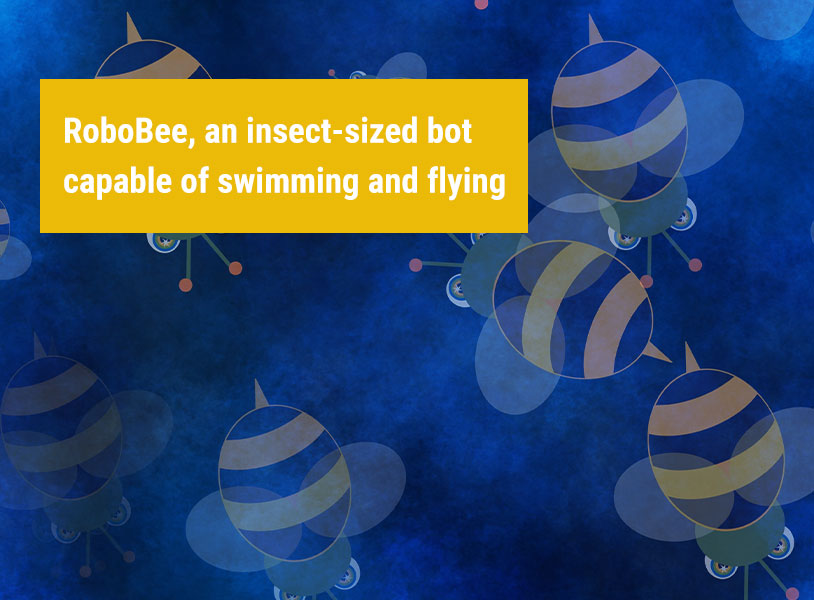 You are probably wondering about the term that we used in the title of this article, the RoboBee. Well, the idea is pretty straight-forward. It’s a small robot that has the capability of flying and swimming. By “small”, we mean pretty small, in fact “tiny” that’s shaped in the form of a bee and hence, that name. What do you reckon? Is it a part of the science-fiction? Are you probably wondering whether we are joking or not? Well, we can’t blame you. The idea looks so avant-garde that we felt the same as you are feeling right now. But, the answer to both of your questions should be - “Negative!” We are actually not joking and it’s a very part of reality. We are ready to prove our point as well because we believe in the proverb “seeing is believing”. Today’s article will highlight the various attributes of RoboBee along with a video that would show the actual bot in action. So, let’s begin.

RoboBee is developed by the research robotics team of Harvard University. For more than 10 years, researchers at Harvard University were working tirelessly on devising various designing techniques through which a tiny bot capable of swimming as well as flying can be brought to life. To sum it up, we can say that these wonderful people were trying to bring an aspect of science fiction to life. RoboBee is the result of that research. This image below should show you the final design of a finished and functional RoboBee.

The goal of this project is to design a swarm of bots suitable for search and rescue operations. Their small size and high speed will be perfectly suitable for this job enabling them to get into tight places effectively and quickly.

The biggest challenge that’s faced by engineers and designers while making tiny advanced robots like this one that can fly as well as swim is the conflicting requirements in design. Consider an aerial vehicle; say a plane or a helicopter. Aerial vehicles need large airfoils example wings to generate a lift. Underwater vehicles on the other hand need minimum surface area to minimize drag. It’s a difficult job to make a design of a bot that’ll be able to fly and swim by keeping those two ideas mentioned above in mind. But the engineers and the designers found a way to overcome that issue. They took a hint from puffins, birds having flamboyant beaks that are proficient in both air and water. These birds use a flapping motion that benefits them in air as well as in water. The designers and the engineers incorporated the same principle in their technology.

"Through various theoretical, computational and experimental studies, we found that the mechanics of flapping propulsion are actually very similar in air and in water," said Kevin Chen, a graduate student at Harvard Microrobotics Lab. "In both cases, the wing is moving back and forth. The only difference is the speed at which the wing flaps."

Description in a Nutshell

RoboBee is basically a microbot that’s smaller than that of a paperclip. It has the capability of flying and hovering like an insect with the help of its tiny, translucent wings that beats about 120 times/second. The bot also has the capability of moving in water. In order to make that transition from air to water, the research team had to solve an important problem, the one that’s associated with surface tension of liquids. They solved this issue to a certain extent. The wind speed is diminished to only 9 times/second. This is mainly done because the surface tension of water is almost 1000 times that of air which should be enough to tear off the bot’s wings. The team brought the wing speed down but retained its flapping mechanism and its original hinge design. RoboBee, while swimming alters its direction through an adjustment of the stroke angle of its wings. It’s almost the same way it does  in air. The team devised a nice way to prevent the shorting of RoboBee while it’s in water. They coated the electrical connections of the bot with glue and also used de-ionized water for their prototype test. RoboBee can easily complete its transition from air to water but sadly, it can’t perform the opposite i.e. it cannot go from water to air at least at his very moment. We hope that they’ll soon devise a plan in future where the transition from water to air will be possible.

You can go through this short video to see the bot in action.

The concept is pretty mind-boggling, isn’t it? But believe it or not, it will soon be a part of the real world if and only if the designers curb all the shortcomings associated with this prototype. Soon afterwards, you’ll probably see headlines in news like “Small robots are carrying out search and rescue operations” or something similar to that. We hope to see that as soon as possible. With that expectation, we’ll conclude our article for today. Hope you had a good read.