OSMO, a Game System which can transform interactions with the iPad 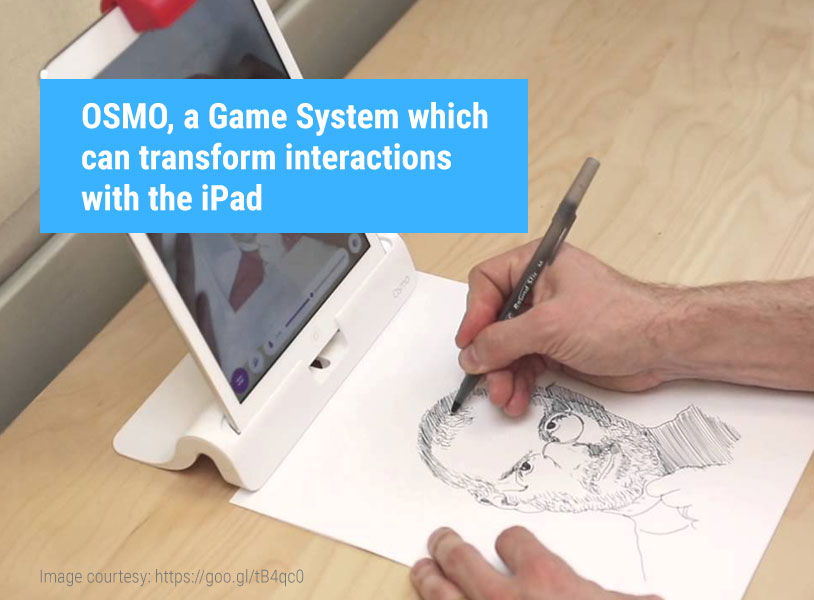 OSMO's a game system that can expand the gameplay on your iPad interface by taking it beyond the iPad's screen. It's basically a collection of games on the iPad interface that can be played using real-world objects. OSMO is the perfect kit to blend hands-off projects like observing a sketch of a certain object on the screen with that of hands-on projects like trying out the same sketch on a piece of paper. Some basic attributes of this game system are explained below.

Components of the Set

The OSMO set contains 3 boxes. The 3 boxes together contain the following items:

The set-up is pretty easy and can be done in only a few steps like these 3 mentioned below.

Physical objects that are available with the OSMO set are used for playing OSMO Words and Tangram. These objects include the alphabet and the wooden pieces. The other two don't need such physical objects. A simple pen and paper will be enough to play with Newton and Masterpiece.

OSMO Newton requires only a section of paper along with some drawing instruments. On your iPad interface you'll find the game dropping colored balls that are seemingly originating from the topmost portion of the screen. These balls are dropped constantly and your job is to redirect these balls on to various targets. These targets are generally hidden behind various solid barriers. This can be done by drawing various types of lines on that portion of paper you are using for this game, using any types of drawing instruments that you have (like pencils, pens, crayons etc.). You can draw shapes on the paper to make the balls bounce off and land on the target areas or you can draw chutes to make the balls slide down. You can virtually do anything that you can imagine. The motto is to make the balls land on the targets. Newton is not limited to papers and drawing instruments only. You can experiment using other physical objects like a toy car or a piece of wood to achieve your goal. But using a paper and a pen/pencil gives you more versatile options for improvisations. The difficulty levels increase with the advancement of the game levels. Newton is a wonderful game to promote creative thinking.

You can go through this video to get an idea of OSMO Newton.

Tangram is basically a type of dissection puzzle where 7 small and flat geometrical figures can be used to construct a figure of larger proportion. These 7 shapes together are known as "tans". It is advisable to use a white sheet of paper for Tangram arrangement over which the "tans" can be arranged for better performance. The objective is pretty simple. You have to arrange the 7 wooden pieces that come with the set in a pattern or design similar to the one displayed on your iPad screen. OSMO Tangram has more than 500 puzzles with varying degrees of difficulty.

This short video will give you a basic idea of OSMO Tangram.

If you want to create an artistic masterpiece using your skills in drawing, OSMO Masterpiece should definitely be your thing. Choose any picture from the storage space or from the web on your iPad and OSMO Masterpiece will handle the rest. Masterpiece will convert the image into lines that can be easily followed. This will help you to draw the image to the best of your abilities with as much perfection as possible.

This short video will help you to get some ideas of OSMO Masterpiece.

You'll need the alphabet that comes with the set to play with OSMO Words. OSMO Words display the number of letters required to construct a specific word. It will also display a picture that will be a hint for your solution. You have to guess the right word and arrange the letters to construct that particular word on the surface in front. Make sure that the iPad camera picks up that image. The letters can be arranged without following the right order. If your physical letter piece is present anywhere in the on-screen hidden word, you'll see those places revealing it. If the letter is incorrect, you'll see that particular letter getting stored in the spaces provided at the top of your screen which will be counted as a "miss". There's a limitation on the number of misses. If the number of misses crosses the limitation, you'll lose the level. You'll be awarded a certain number of points for guessing the correct word.

You can go through this video to get an idea of OSMO Words.

OSMO Numbers is an additional game in the series that is also sold separately. It also comes with the OSMO Genius Gaming System Kit but it is advisable to purchase it separately from the monetary point of view. OSMO numbers is available here as a separate accessory of OSMO gaming system. The app can be downloaded from here. OSMO numbers is the perfect tool to engage in primary calculations with numbers involving addition, subtraction, counting etc. You'll need the physical tiles that include decimal points and digits to form numbers. Addition can be performed using more tiles, subtraction can be done by deducting tiles and multiplication can be done by joining tiles together.

Take a look at this short video to get an idea of OSMO Numbers.

OSMO kit (without OSMO Numbers) is available here. It's the perfect game to engage children in hands-on activities which allow them to unleash their creative ideas and have fun at the same time.

* OSMO has released a new coding kit. You can go through this article to know about the details, specifications and other technicalities of OSMO coding.