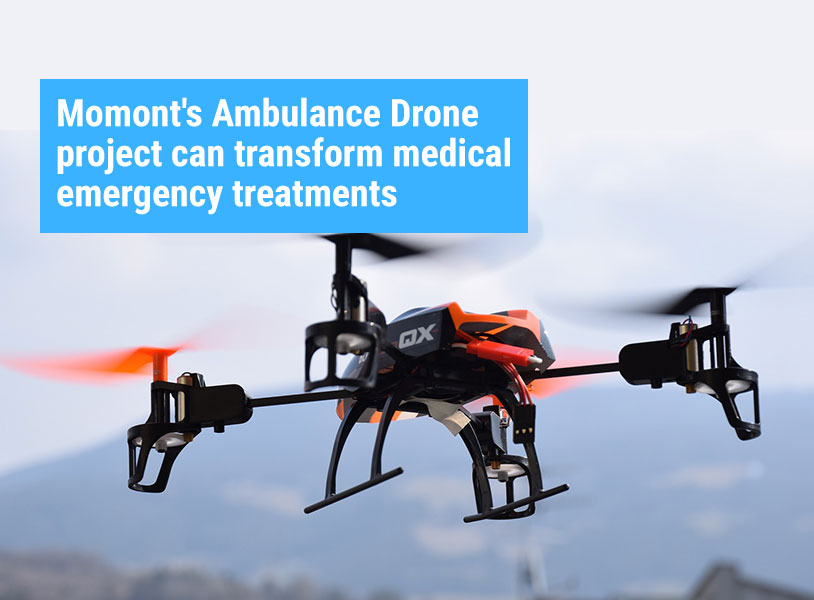 There are a number of medical complications where time plays a crucial role in bringing the patient back to normal. These conditions might not be foreseen and can take place anywhere at any time. One such complication is cardiac arrest where time is of immense importance. Alec Momont, an ex-engineering student from Delft University of Technology, Netherlands had to submit his final year University project based on industrial design Engg. before the completion of his graduation. Momont got inspired by countless negative headlines from media where drones are particularly mentioned because of their extensive uses in advanced warfare. He wanted to apply this drone (unmanned flying vehicle) technology in a positive manner where it would play an important role in improving certain aspects of humanity. His project involved the use of this technology in medical emergencies where immediate help could be provided to a patient in case there's an emergency which in this case, was cardiac arrest.

Momont was mainly inspired by the negative overviews of media and critics, especially where drones were concerned. The extensive use of drones in advanced warfare is generally frowned upon. Drone technology is pretty advanced and Momont felt that the same could be used to improve human life in a positive manner. Momont had a neighbor who expired due to a serious condition of cardiac arrest. The ambulance failed to arrive within the stipulated time and hence, failed to save that unfortunate person's life. Momont was 23 at that time. He thought about implementing drone technology in carrying emergency medical equipment to complicated medical situations where time was short. Thus, he conceived the “ambulance drone” project.

Each drone has a built-in defibrillator to revive an individual suffering an unforeseen condition of cardiac arrest. This drone has the capability of moving at a speed of around 60 mph. There's one downside though. The drone is driven by a battery that can last for only ten minutes (approx.). The drone has six propellers and is painted yellow for easy detection. Alec Momont reckons that it will be possible to provide defibrillation to a patient within a twelve square kilometer (around 4.6 sq. miles) area in a minute. This will result in a steep rise in the survival rate of many patients. Momont envisages a group of three thousand drones placed at various zones of Netherlands, considering the distance-traveling capabilities of each drone. He expects the drones to be stationed on various telephone poles. By calling the emergency number (911), the closest drone can be summoned. This drone could be flown to the designated zone through manual control or through autonomous maneuvering. The drone has the weight of an estimated 8.8 pounds. It also includes a different cell for providing power to the defibrillator. The defibrillator can deliver up to fifty shocks.

Alec Momont with the Ambulance drone

What needs to be done after the Drone lands?

After the drone has landed on the designated location, a person can open a panel that's located on the drone itself and remove the pair of defibrillator paddles that are to be used for reviving the victim. A medical specialist or a paramedic who's at a faraway location can watch him/her through the drone's on-board camera and provide instructions as well. You can go through this video to get a clear idea of the things that should be done after the drone has landed.

Alec Momont believes that using drones to transport defibrillators to the cardiac arrest victims can make people see the potential of drone technology in emergency medical treatments. This is just the start. He plans to improvise more on this technology to make the drones as versatile as possible. Momont hopes to double his drones' top speed to make them suitable for a quicker response. He also has a novel idea. He plans to put heat sensors on the drones to make them locate disaster victims easily and effectively through autonomous maneuvering or manual maneuvering. An additional feature such as the Sonar system is also being considered for possible implementation on to the drone. It's believed that the drones would not be confined to transporting defibrillators only. It may also be possible in future to design them in a manner which would enable them to transport other emergency medical equipment, to aid patients.

The Ambulance Drone project hasn't made its commercial debut yet because of the involvement of legal issues. The drone's steering mechanism is also in its “developing” stage. The expected cost involved [a staggering amount of $19,000 (each)] is also very high at the moment, which needs to be substantially reduced to a more affordable amount. Considering the possible number of lives that it can save, it can be predicted that this technology may soon be implemented by various countries of the world for the benefit of people. The number of drones might vary because of the involvement of such a hefty price, but with a possible decrease in price, the numbers should increase. The benefits of this technology after implementation would also convince countries to inculcate more and more drones for treatment of medical emergencies. There's no denying the fact that Alec Momont's achievement is a noble endeavor which can definitely make the world a better place.