Introducing Lauren Ipsum: A fairy tale based on Computer Science 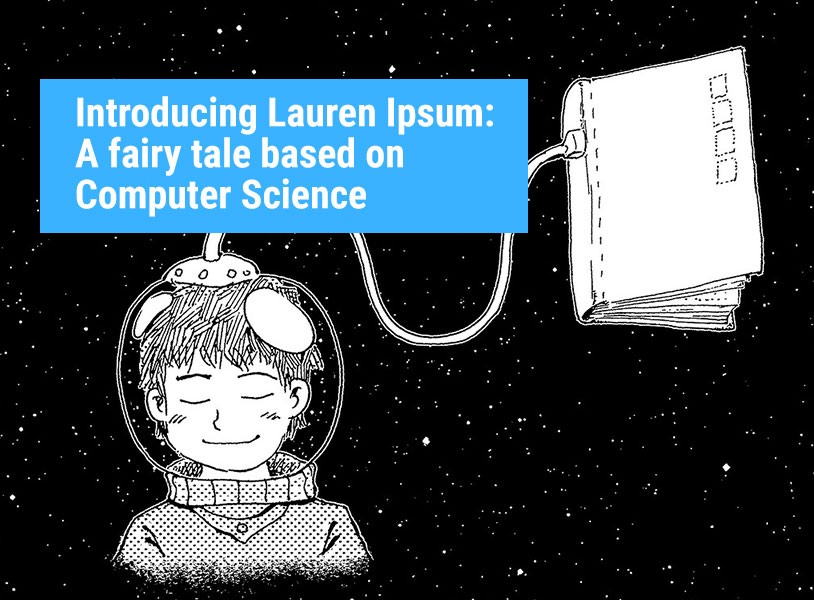 “The truth is that computer science isn’t really about the computer. The computer is just a tool to help you see ideas more clearly. You can see the moon and stars without a telescope, smell the flowers without a fluoroscope, have fun without a funoscope, and be silly sans oscilloscope.

The book is basically a sort of fairy-tale. The book's protagonist is Lauren, a little girl who has wandered away from her home after a dispute with her parents and gets herself lost in the 'Userland'. Lauren finds many creative adventures in 'Userland'. She comes across logic, symbols, rounding errors and encounters a number of peculiar characters in the form of human beings as well as animals throughout her journey. The characters include Hugh Rustic, the famous wandering salesman (those who are familiar with TSP (Traveling Salesman Problem) which is related to computer science should know this classic problem), Xor (a chameleon who's color blind) and many other strange characters. All these characters are used by the author to explain the real concepts of computer science. The book comprises of a number of puzzles that need to be solved by the protagonist to find the way back home. The way out can only be found through gates protected by logic, Jargon-invested swamps, perils at Philosopher's diner etc. Stories are constructed surrounding a metaphor for summarizing computer science related ideas. There's a field guide at the end of this book which is used by the author to make the readers aware of the underlying computer science concepts introduced to them previously in each chapter of the book. These concepts are mainly related to TSP, upper cum lower bounds, binary searchings, recursion, problem solving, algorithms etc.

As Lauren explores this fictitious world 'Userland', she learns about computers without even perceiving it. Similarly, the readers will also be unaware of the fact.

The Lauren Ipsum book's (paperback) front and back cover

The learning experience and the benefits

Problems like TSP may look pretty difficult at hindsight but the book handles these problems in a manner which is seemingly quite simple and interesting from the point of view of readers. The stories contained in Lauren Ipsum make this book real fun to read. Hence, this book is perfect for children to get a head-start in computer science.

Lauren Ipsum's biggest benefit is to develop the reader's critical thinking ability to come to a quick solution to a practical problem in life. It teaches the readers to think systematically when facing a particular problem and solve it as quickly and methodically as possible. Technology is a simple outcome of expressions related to certain ideas of computer science. It's necessary to comprehend those ideas first and improvise on them as much as possible before understanding the underlying principles of the working of various tech-gadgets like computers, robots, electronic appliances etc.

Carlos Bueno is the author of Lauren Ipsum. He used to work as a Facebook engineer. Currently he's working at MemSQL, a database company. He also writes many articles based on computer science.

Lauren Ipsum is available in the form of paperbacks as well as e-books. This book can be deemed a recent version of the classic tale "Alice in Wonderland". The readers would not be disappointed for sure. After all it's based on a novel idea- "computer science without computers". So it's definitely worth a read.

Posted by FUTURITE in After School Activities
Tags:computer science, student