A peek at ThinkFun's Code Master: A Board Game Introducing Coding to Children 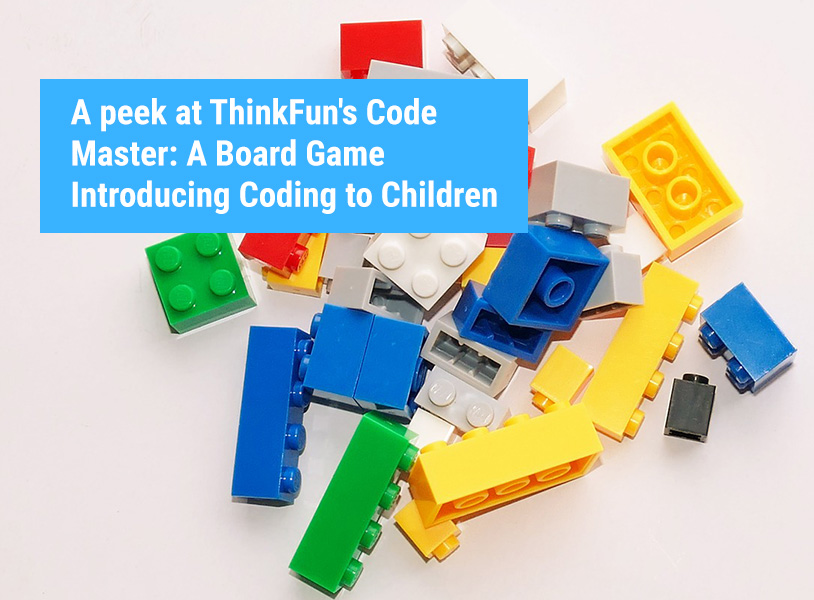 There are a number of high-tech toys in the market that have gained popularity in teaching coding skills to children. There's no doubt that these toys are convenient enough to introduce coding to your children. But there's one drawback. These high-tech toys are costly. What about a more traditional approach? For example, a board game that provides the exact same lessons in a different style? ThinkFun's Code Master can be deemed one of the best board games in this bracket, to develop coding logic in children. And the best thing is that the cost involved is quite nominal when compared to that of the high-tech toys.

ThinkFun's Code Master contains the following items in the box:

This game is a single player game. It's a board game that's mainly based on puzzles. The solution logic is equivalent to that of coding logic. The game has sixty difficulty levels in ascending order. This game is suitable for children belonging to age eight years and up. The things may appear to be intimidating at the start. The puzzles will help the player out, though. The puzzles will show the places where the portal, avatar and the crystals need to be placed on map. The puzzles will also tell the players the action and the conditional tokens that they need to deploy for a certain level. Guide scroll presents the player with the structure that the program needs to take. A flowchart of the program is present in the guide scroll that can be used by the players to understand the form of the specified program in details.

At first, the players need to set their levels. The levels are in ascending order of difficulty meaning level 1 is the easiest and level 60 is the toughest. The levels at the start are generally simple in nature, containing a simple and linear sequence of instructions. Gradually, the difficulty levels increase and the players are introduced to more sophisticated or complex programs bearing conditional branches and loops. The players can consult the guide scroll to determine the pieces required for completion of that level and to get the outline of the program that needs to be formed in order to achieve the particular goal. The player is presented with specific colored chips which will guide the avatars along the colored paths in order to come to the portal which is the end of that level.

The player needs to set the tinted chips in order by contemplating the final results of the program. The player then has to choose the paths that are in various colors as per his choice in order to lead the avatar to the destination. There are some possibilities of picking up crystals in the way. “Crystal picking” is an additional element of the game which makes this game more interesting. But this process needs to get inculcated into the attributes of the program which can be a little tricky. The player has to develop the logic carefully to make his avatar do the same. The player can find many potential ways to solve the particular problem but there are no multiple solutions of the problem, only one correct solution.

After the user has completed the programming part, it's necessary to run the program in order to find the correct solution. For execution of the program, the specified colored chips that the player had mentioned in his program have to be used. The player has to move the avatar across different colored paths that he had previously specified in his program. The goal is accomplished if the avatar has reached the portal taking the right number of colored paths that is mentioned in the objective. If it has not, the entire process has to be revoked until the correct solution is reached.

What does the game teach?

Code Master teaches a number of key attributes associated with coding to children. It develops the logical thinking ability in children and also allows him/her to actually visualize the logic in action. The child will be able to realize whether his logical approach is suited to the solution or not. It also encourages children to develop patience when their program is incorrect. Code Master teaches them the fact that no one generally comes up with a correct solution from the start. But there's always the possibility to rectify the errors. In a nutshell, the game teaches these four things to children:

It can be said that the fundamental concepts of programming logic can be taught to children by Code Master in an effective and entertaining manner. Through the program execution rules implemented by the game, children will be able to comprehend the various ways in which a computer executes a program. The different difficulty levels of the puzzles help to develop logical thinking in children, thereby strengthening their aptitude to think in a manner similar to that of a real computer and imagine the final result of their program instructions.  ThinkFun's Code master is available here. You can go through the detailed specifications on the same page.