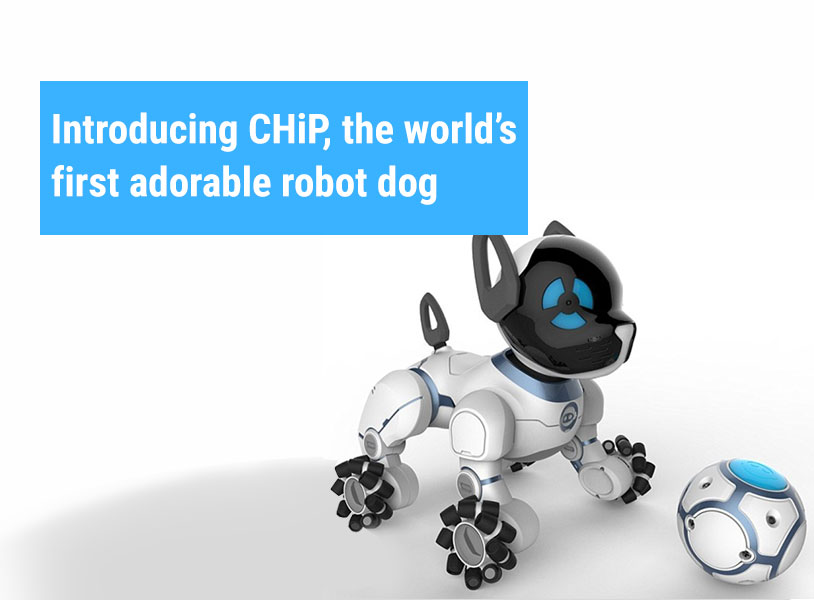 Robot dogs are not too uncommon these days. Several of these bots were developed in the past and are still available in the market for consumers like the Sony AIBO and the iCybie.

Meet CHiP (Canine Home Intelligent Pet), a robot dog like the way it says. But this robot can be considered a stand oout one because of its authenticity to that of a real canine. This article will highlight a few extraordinary features of CHiP for your reference.

CHiP’s designed by WowWee, a company who trades in hyperactive, RC-driven biomorphic robots.

CHiP stands for Canine Home Intelligent Pet and undoubtedly, it does live up to its name. This standout robot dog is intelligent and can interact with the owners exactly similar to that of a typical family pet.

CHiP combines the use of advanced technology with that of artificial intelligence to give an authentic pet experience to the owners.

CHiP isn’t like another cool new gadget. In fact, it’s extraordinarily advanced features make the users hardly realize that they are actually interacting with a robot.

So what can you expect from this robot dog? You can expect almost everything similar to that of a live family pet dog.

CHiP appears to be a cute little puppy. The robot moves around at high speed on Mecanum wheels that provide full mobility to the bot making him move in any direction as per choice.

The more you interact with the dog, the more personalized becomes the experience. Another thing you should know that all CHiPs are unlike each other. No two of them are similar. Your robot dog will come with a SmartBand that helps the robot to identify his actual owner.

The CHiP will also come with an app through which users can do a few more things like:

The app will serve to be your CHiP notification center on your phone thereby making you stay connected to your pet robot for as long as you like, wherever you are. The app will be released soon on iOS and Android, and should be available free of cost

The robot comes with a smartband that looks like the image shown below.

The SmartBand is basically your robot’s remote control. The functions are labeled in the image up above for your reference.

CHiP has an array of sensors, transmitters and receivers all round its body. Refer to this image below for a more detailed idea.

The things that CHiP can do

Learn: CHiP’s intelligent algorithms provide the robot with a number of learning preferences. Your preferences will shape the robot’s character.

See: The BeaconSenseTM technology is used by CHiP for situational awareness.

Fetch: The robot’s equipped with a smart ball that can be used for playing fetch or other similar activities.

Run: The robot has 4 mecanum wheels (wheels that can make a body move in any direction) used for catching, chasing and kicking a ball.

Feel: CHiP has capacitive touch sensors on its exterior that allows the bot to feel pats and other similar interactive activities.

Sense: The robot comes with accelerometer and gyroscopes that are able to convey the message to Chip whether he’s being picked up or not.

This short video below will show you the CHiP in action.

CHiP is available for pre-order on amazon. But to be fair, the price is sure to burn a hole in your pocket. But we feel that it’s justified (at least up till now) especially when you consider its features and the fairly advanced artificial intelligence. But if you don’t agree with us, don’t hesitate to put your comments below. We would love to hear all sorts of opinions. That should be all for now. Hope you had a good read.