How 3D Design and Printing is Transforming Space Exploration and Research 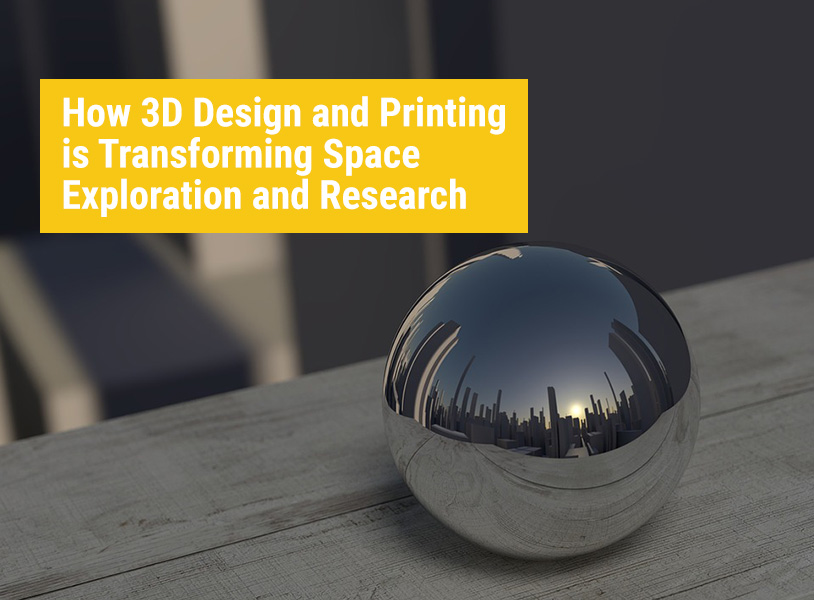 The Additive Manufacturing (AM) technique has already brought a revolution in various industrial fields. It has brought a metamorphic transformation in the field of space exploration and research. The benefits of 3D Design and Printing (AM) in that field are endless. Let's go through some of them which are listed below.

Astronauts were generally dependent on launches from the Earth for transportation of various goods or items required for their space research and exploration. What happens if they forget something even after a long, thorough planning? What happens if the situation calls for a certain object and they don't have that within their reach? They are miles away from our planet. 3D printing can solve that problem at least to a certain extent. They can manufacture certain items in space directly without relying on another supporting launch from Earth which will definitely result in an additional cost of time and money.

Easy and Ready Availability of Replacements and Spare Parts

Certain objects that are required for space exploration can be fragile in structure. What happens if they break? Space shuttle or rocket launches generate vigorous vibrations. These vibrations can easily break apart delicate objects. 3D design and printing can readily solve this problem. Replacements can be made easily and readily as per requirement. Even spare parts can be constructed depending on contingencies.

"Additive manufacturing with 3D printers will allow space crews to be less reliant on supply missions from Earth and lead to sustainable, self-reliant exploration missions where resupply is difficult and costly,"

Establishment of Outposts on our Neighbor Planet (Mars) and the Moon

Establishment of permanent outposts on Mars and the moon becomes possible with the implications of this technology. The feedstock has to be a local source e.g. Martian or Lunar materials. Feedstock refers to the biological as well as renewable raw materials associated with the produce.

The simple diagrammatic representation is shown below:

3D designing for manufacturing objects through the help of 3D printers has altered the rules for designing objects for space exploration and research. The traditional designing processes generally had two thumb rules:

Items that are Deemed  “Impossible” can be made “Possible”

3D printing can be used to build objects that are difficult or impossible to manufacture by hand.

The titanium matrix (lattice) ball, which is depicted in the figure and is manufactured by 3D printing.

The external geometry of this hollow ball is complex. It's very difficult to manufacture this object without the aid of a 3D printer.

It is found that 3D printing usually involves the use of raw materials such as plastic, filament, carbon fiber or metal fiber. These materials are recyclable and hence, it virtually generates no wastes.

Manufacturing through 3D printing is much faster when compared to that of the traditional methods.

The cost involved in manufacturing certain objects through 3D printing is a very nominal amount. By reducing wastage and making replacements available, the cost incurred is also reduced to a certain extent.

Lattices of Lighter Weight can be Manufactured in Space

NASA is working on several tests involving 3D-printed rocket engines. The scope of application is still in its infancy but the idea is there to implement at some point. It is known that the tested parts show more durability and bear more efficiency than traditionally manufactured parts. NASA has also gone forward with their plan of 3D printing for “food”. They incorporated the idea in a 3D printer prototype which will be capable of printing pizzas. According to NASA, this technology will be immensely beneficial on long distance space travels.

It can be said that space technology (both exploration and research) will soon be dependent on 3D printing for a number of factors. Some of the factors are already explained. It can also be estimated that more factors will come in. The scopes are endless. NASA had already built a racket wrench using a 3D printer at their space station. This is just the start. More prototypes of this technology will soon come into existence.