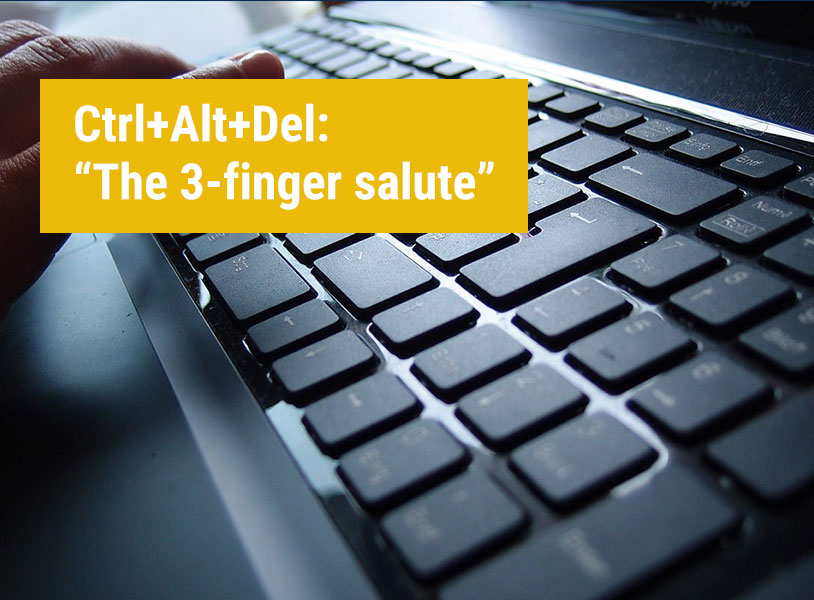 Ctrl+Alt+Del is the abbreviated  form of Control-Alt-Delete where the user has to press “delete” while holding the 2 keys- Ctrl and Alt at the same time. The general function of this action is to interrupt a process or the executable application. Ctrl+Alt+Del is also called the “3-finger salute”. This keyboard computer is particularly suitable for IBM PC-compatible machines.

Bill gates reckoned that the entire idea of Ctrl+Alt+Del was a type of mistake made by the company. He reckoned that a single button would have sufficed but David Bradley was responsible for designing such a shortcut for certain reasons. The reason behind the design of this peculiar shortcut and the manner in which it became popular seem pretty interesting.

David Bradley, an engineer who was working on the initial IBM PC was responsible for inventing this combination that was mainly designed with the idea of rebooting a PC. David Bradley was involved in the project of development of IBM's new PCs during that period. The 3 keys were chosen in a manner that they are not close to each other for easier user accessibility. There was a specific reason behind that as well. The strange pattern of the shortcut was developed to prevent accidental pressing of the three keys together because it's not likely for the users to press “Ctrl, Alt” on one hand and “Del” on the other without knowing that such a shortcut exists. The peculiar locations of the three keys on the keyboard would see to this fact. Bradley's intention behind the design was mainly to design this shortcut for himself and other fellow coders.

One of the main problems of the programmers in that period was the unavoidable coding glitches that used to occur during the time of their developments. The solution was a manual restart of the entire computer. The manual restart of the computer started a number of memory tests which were pretty time-consuming. Bradley's Ctrl+Alt+Del solved that problem to a certain extent where the system reset was triggered without encountering any sort of memory test. Thus, the programmers could save their valuable time and resources.

Microsoft Windows 3.0 was given the green signal in the early 1990s and thus, the 3-finger salute came into prominence. The shortcut was mainly noticed by people as their computers started crashing and the dreaded BSOD “Blue Screen of Death” illuminated their screens. The quick fix mentioned in the BSOD was Ctrl+Alt+Del that would help the users to reset their PC. It looked like the one showed in this picture below.

Thus, Bradley's design gained popularity. People used to tell others that for BSOD problems, press “Ctrl+Alt+Del” and the problem might get resolved. The message was also displayed in the BSOD itself. Journalists praised Bradley's design, the quick-fix solution hailed to be the “3-finger salute”.

Ctrl+Alt+Del is used by Windows PCs to terminate any application or to reboot the specific operating system. If the users use Windows 95 or any version superior to the same,  Ctrl+Alt+Del brings up one window which allows the users to detect the status of the programs that are running on their PCs. They can choose to terminate them from the window one at a time. The window is also known as the task manager. It provides additional features of shutting down the PC, restarting the PC etc. These features vary slightly on the basis of Windows versions. An important feature of Ctrl+Alt+Del that's specific to Windows 95/98 is when the specific combination is pressed quickly twice in a row, the OS closes all running programs and restarts the PC.

The OS sometimes gets suspended (commonly known to be “hanged”) while a running application is “not responding” on the same platform. This type of computing circumstance is faced by almost every user. The task manager that can be brought up through the use of Ctrl+Alt+Del can help the users to regain control of that system. By terminating the “not responding” applications, the users can resolve issues without the need of restarting the computer. Even if that's not resolved, the users have the option to reboot that system. Certain versions of Windows provide the options to lock the system, switch users and change the password when the Ctrl+Alt+Del is pressed.

Bradley was always surprised by the popularity of his invention that is said to have been done in a mere 5 minutes. He's got a point because presumably the most important part of his career is those precious 5 minutes involved in making such an algorithm which figuratively landed him in Microsoft's hall of fame. But Bradley said that he's not ready to take the entire credit of that invention and wants to share it with Gates. This is what he said in the end-

“I may have invented it, but I think Bill made it famous.”

Posted by FUTURITE in After School Activities
Tags:computer, keyboard