DASH AND DOT: Interactive Bots that blend Robotics with Education 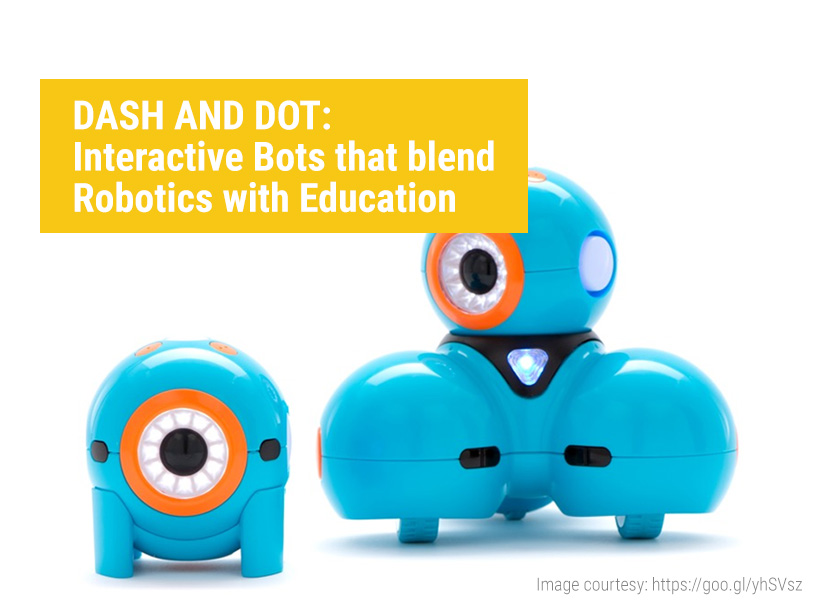 Wonder Workshop's interactive robots Dash and Dot can make your child's play-time smarter. “Coding while you are playing” is the key feature of these bots. These bots are fun to play with. Dash and Dot also develop computational thinking in children. They promote collaboration between siblings, friends and also between parents and children. These bots can be the best engaging and effective learning tools for children. The recommended age group for this set of toys currently ranges between 5 to 12. Let's have a detailed look at a number of attributes of Dash and Dot.

The set of bots comes entirely assembled. But they are not completely charged from the start. An orange cable comes with the set which can be used to charge the bots. The bots require four apps. These four apps are:

You can get these apps from Google play on your android device or from the Apple App store on your IOS. You can also get them directly from their website.

Dash is under seven inches in height. It looks like an assembly of four balls. Three balls constitute its body and another ball is its head. Dash is entirely made of ultramarine (blue) plastic with some orange highlights. The appearance is pretty deceptive. It looks very simple but it is a fairly complex bot. You'll get the idea when you will switch it on and see the 12 LEDs (Light Emitting Diodes) in its solitary eye light up in glee. Turn Dash over and you'll find 2 large wheels in front and a small wheel at its back. The wheels provide versatility in Dash's movements. The other parts include:

Dash's ears are RGB (Red, Green, Blue) LEDs which switch colors. Dash also has a spotlight having RGB LEDs on its chest exhibiting the same features. An eyeball made of a number of LEDs is present in front. Red taillights are also present. A micro-USB port is there for charging.

Dot is a stationary bot. It also exhibits a huge eyeball in front. The body has several sensors, a power switch, a speaker and a micro-USB (Universal Serial Bus) port. Four buttons are there on its head for interactions. Rubber like protrusions (feet) are present at the bottom to make it stay in its place.

Both of these bots have friendly looks that should grab your child's attention. These bots are not fragile and they are built to sustain shocks and bumps that are experienced by almost every child’s toys.

Dash and Dot can interact with their surroundings through sensors. Their key features include:

At first the robots need to be paired with the smartphone (Android or IOS) via Bluetooth. Now let's have a look at the apps.

The Go is the basic app. It basically transforms the bots (mainly Dash) into a remote-controlled robot. The user will be presented with a panel bearing several control options. The screen will be divided into two panels. Several options will be presented at the top of each panel. The small options will include movement, controlling Dash's eyeball, moving Dash's head, controlling sound and changing frequency and color of Dash's LEDs (from left to right). When the small movement option is selected, the left panel will have the control options, like that of a joystick. Dash can be moved forward, sideways (left and right) and backward through the control of this joystick. There's a volume-like control in the left panel. This control can be used to modify the speed of the bot. When the small option for the control of the head is selected, the right panel provides an interface that controls Dash's head. The head can move up, down, left and right through the controls provided by this panel. Similarly, on selection of the other three options, a graphical interface pops up on which the necessary actions can be performed.

Path is a basic programming application for Dash. A “recipe” is displayed which the user has to follow. Let's take an example:

Considering the recipe to be Pig->Cow->Tractor. The user has to draw a pattern representing any path on the screen using his/her finger. The concerned symbols, constituting pig, cow and tractor need to be dragged and dropped on the path in the order suggested by the “recipe”. The Dash on the user's screen begins to traverse the same path. The real Dash, in the meantime, follows the pattern that is being followed by the on-screen Dash. When the on-screen Dash reaches the concerned “recipe” symbol, the actual Dash makes a noise. In the above case, the real Dash “moos” when the virtual Dash reaches the cow symbol.

Blockly is a coding app that works with Dash as well as Dot. It is a “drag and drop” type programming application. A goal is presented to the user and it's being displayed at the base. Proper code snippets need to be placed in right order for proper execution of the goal.

This programming app introduces coding to children through music. For this app, Dash's xylophone is needed which is sold separately. The user can compose music with this app. The various programming concepts that can be taught to the user through this app are: