AI (Artificial Intelligence) from Labs to your Children’s Play-Room 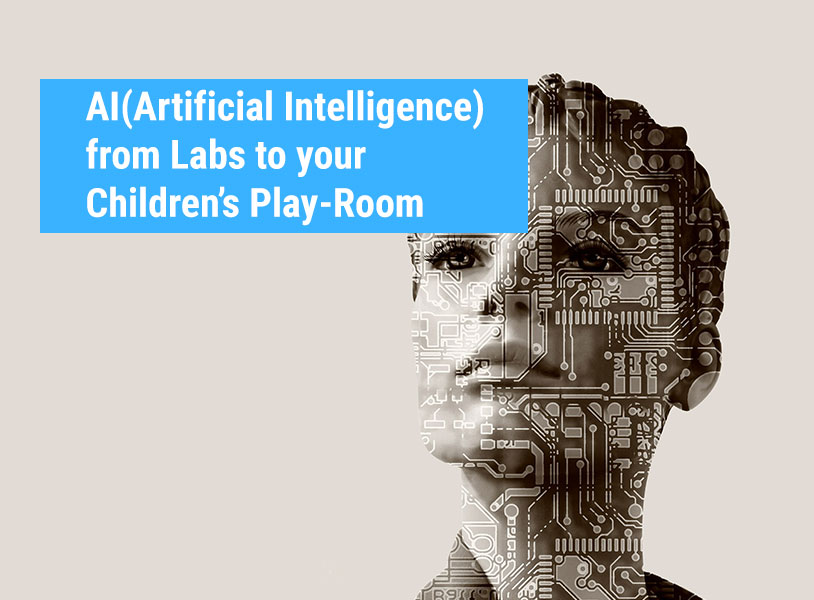 “I was disappointed after scoring low marks in my exam. Then Sonny came to me and told me that he wanted to play. I got up from my couch and threw him the ball. He ran after it and came back to me with the ball. I was so happy.” Mark said this to his mom after she came back from her office. Now Sonny is actually a robot with built-in Artificial Intelligence. We reckoned that this was actually possible only in the movies or in the futuristic world. But now Virtual World has become a reality. Robotic toys with built-in artificial intelligence have gained tremendous popularity among children. These toys have actually become a part of the family.

What happens when you touch a hot object, say a hot iron or a hot electric kettle? You withdraw your hands automatically. That's an example of human intelligence. Your neural reflexes act within that split-second telling you to withdraw your hand as soon as possible. Let's take another example. Say that you are playing catch with your friend. Your friend throws the ball high in the air. What do you do? You take the right position, cup your hands and wait for the right moment to close your fingers on the ball, finally resulting in a successful catch. Your brain tells you to perform those actions as per necessity. But how can we make machines behave like that? Thus, Artificial Intelligence (AI) comes into existence.

The ability of machines to imitate the human behavior or any living organism and learn from previous experiences is said to be a form of artificial intelligence. When you are close to a hot metal object in future, you will avoid touching it, at least not consciously. You have learnt from your previous experiences and will avoid repeating the same. Similarly, there's an aspect of artificial intelligence which will tell the machines to learn from their previous experiences. Take an example of the voice recognition technology used in various movies. The actor says “BMW start” and the car starts its engines immediately. If any other person says those same words, the car will not start because it recognizes that particular voice, only.

Artificial intelligence is developed keeping the above three in mind.

Let's say that you are playing the game FIFA 16 or Pro evolution soccer in the “single player” mode. Your opponent here is the CPU. You will see your opponent players performing the tackles, shots on target, crosses, interceptions, passes as per they seem necessary. You will notice that they perform those actions when the odds are in their favor. For example- the opponent player will not shoot from the half-way line. They will line up shots close to your D-box. Now why do they do that? Shots from the half-way line have more probability of missing the target than shooting closer to your penalty box. They want to score goals for their team and for that, they have to perform their deeds as per the in-game conditions. Now that's a good example of artificial intelligence because the CPU players are imitating the human behavior and also learning from their previous experiences. Once an opponent player gets a yellow card for a rash tackle, he will avoid going into further rash challenges unless unavoidable. Here, learning from the previous experience factor comes in. The same happens in First Person Shooter (FPS) games where you are the target of your artificially intelligent enemies who want to neutralize you as well.

High-tech toys are addictive and fun to play with. They are an awesome source of learning as well. “Learn while you have fun” seems to be the key motto of these toys. Almost every high-tech toy has built-in artificial intelligence that can be customized. These customization features will allow children to develop their creative as well as technical ideas. Successful execution of these ideas will result in tremendous fun and satisfaction. Some examples of these toys are-

Imagine you are sitting in front of some Lego pieces scattered helter-skelter on the floor. Just think about putting those parts together into a working robot to do your chores as per your own programming logic. Isn't that interesting?  Lego Mindstorm EV3 allows you to do that. You can transform them into the R3PTAR(a cobra bot). This toy can be controlled by a remote or by pairing it up to the Bluetooth of your smart devices, say your I-phone or Android phone. The R3PTAR can slither on surfaces and strike with the speed of lightning as per your control. There's an animated app bearing clear instructions which will help you with the building process. The programming part is very simple as well. Just drag and drop various programming snippets bearing instruction modules into the visual platform and press “play”. These bots come with pre-written programs as well but the best thing is you can edit those instructions as per your choice. The AI is hence open to your inputs and can be modified as per your liking. Other options are TRACK3R, SPIK3R, GRIPP3R etc.

The word “biomorphic” means something resembling a living organism. Biomorphic robot toys are immensely popular among the modern generation children considering the fact that their features are customizable. The personality can be modified as well. The AI that is built in understands voice commands and performs actions accordingly depending on its mood which is pre-programmed and unpredictable. This makes such toys almost similar to a living organism. The AI also makes it possible for the robot to move around your house without bumping into things.

There's one more feature and the parents will surely love this. It has a “remote visual” feature. You pair it with your second I-Phone and your robot transforms into a spy. You can actually see exactly what the bot sees. You can actually listen in as well. Robosapien, isn't it? A Homo sapien (human being) substitute! Use it to see what your children are doing without actually barging into their rooms. A perfect weapon to make your children do their homework. So, finally you are transformed into a James Bond II!

The toy car racing experience has also become very realistic nowadays. The introduction of AI in smart toy cars has brought the virtual real world to life. It's almost the combination of Need for Speed and Hot Wheels! The AI will help your car to stay on its course but the control of speed is still with you. You also have to use your controls skill to deal with the various obstacles on the track and overtake other cars as well.

Artificial Intelligence has tremendous potential. The more we make machines behave like humans, the more prospects open up. Involve your child in customizing AI. Make him build such toys from scratch under your guidance. These toys are not fragile because they are meant to be handled by children. Children will love this and more importantly, they will learn a lot from this. You will virtually have a Wall-E (maybe not in looks) in your family!