An Overview of Radio-Controlled (RC) Aircraft 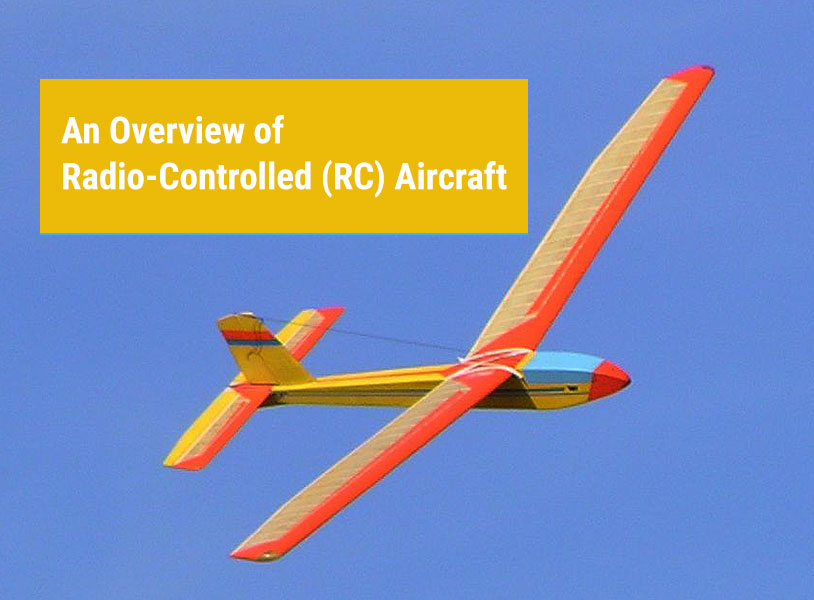 Flying RC plane models mainly came into existence in the form of a hobby. But now the applications have increased.

Government, scientific and military organizations use RC aircraft for gathering weather readings, experiments, aeromodelling, testing, drones and so on. Aeromodelling has also become an effective means of after-school STEM education and activity.

Let’s go through a few significant types of RC aircraft in more detail.

A RC aircraft is basically a small flying machine which is usually controlled by a remote from the ground by an operator through a hand-geld radio transmitter.

The radio transmitter communicates with the receiver on the craft sending signals to the servos (servomechanisms) that change the control surfaces on the basis of joystick positions. The orientation of the plane is affected by these control surfaces.

There are various types of RC aircrafts. Some notable ones are mentioned below.

It is considered to be the most realistic version of aeromodelling. The main purpose of Radio-control scale aircraft modeling is to replicate the full-scale aircraft designs in aviation history.

Those historical models are mainly designed in the form of scaled down RC models for testing the ways through which the future aviation models can be improved.

Planes that do not possess any forms of propulsion are typically considered to be gliders.

Unpowered glider flights must be supported through exploitation of the natural lift that’s produced from wind or thermal power.

Powered gliders are more in fashion these days and us usually considered a part and parcel of RC aircrafts. Powered gliders combine the efficient wing size of the plane with the wide flight envelope of a glider airframe coupled with an electric motor. That makes it possible for powered gliders to achieve long flight times. It also allows them to have a high carrying capacity.

Powered glides can glide in any direction irrespective of thermals or lifts.

These are the most expensive forms of air-plane models available in the market. These jets typically use a duct fan to power them up.

These airframes are manufactured from fiber glass as well as carbon fiber. Electric powered jets are typically powered by electric duct fans. These jets are generally made of Styrofoam.

Wooden spars are reintroduced inside the aircraft body for a rigid airframe.

Pylon racers are considered to be small propeller-driven aircrafts that can race around a 2/3//4 pylon track.

These are often undetectable or are very hard to detect and can race around at a relatively high speed (sometimes more than 240km/h).

RC helicopters are often grouped in the same category as RC aircrafts but they are vastly different because of the way through which they are constructed. The difference is not only in constructions but also includes aerodynamics.

Ornithopters are certain aircrafts that have gathered the inspiration from nature.

These models are designed in the form of a bird and even follow their flight principle. Yes, we are referring to the flapping of wings. The image below should be enough to clear all your doubts.

In this modern generation, a number of model RC planes are available in the market at an affordable price.

These RC models can be a “play out of the box” or should be made out of “scratch” from a specific plan. These models generally come in kits. The various types of RC toy aircraft kits are:

This was mainly seen to be a form of hobby but nowadays, it’s looked upon to be an effective mode of education. Any student who’s interested in science or electronics or aviations and is actually considering those subjects a career to pursue in his/her future would benefit a lot from aeromodelling.

With that we’ll bring this article to a close. Hope you had a good read.