An Overview of Compressible Robot with Articulated Mechanisms (CRAM) 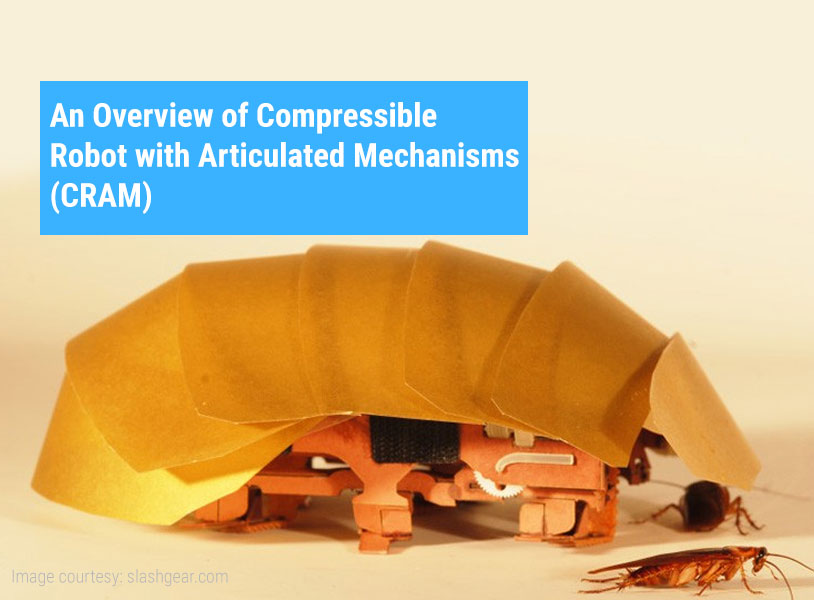 A CRAM is basically a robot that possesses a mechanism of advanced compressibility. In simpler words, we should say that this is a bot that resembles a living organism that exhibits this very exact feature of compressibility which should be a cockroach. Are you feeling squeamish? Yes; we would agree with you on that matter. Anything that resembles such a repulsive insect is always squeamish in nature. But don’t judge it only on looks. Its functionality is pretty jaw dropping because it can exactly function in the same way as that of a roach but in a positive way and yes; it will certainly not spread diseases. Instead, it can be used for the benefit of the mankind. This article will throw ample light on this roboroach or CRAM (Compressible Robot with Articulated Mechanisms) for your reference.

Have you ever seen a roach squeezing its way through narrow crevices? If you haven’t, we encourage you to put aside your revulsion for a while and watch one if you have the opportunity. You’ll understand what we are talking about. A roach posses the capability of scurrying through narrowest of the narrow crevices; the best example would be under a door where the space between the floor and the lowermost portion of the door is so narrow that only a sheet of paper would probably go through. But roaches have the capability of squeezing through the same path without injuring itself. But how do they do that? We’ll come to that. A cockroach has a hard and immensely flexible exoskeleton. The flexibility of the exoskeleton allows it to pass through tight spots. Bend but do not break- that’s the principle of a cockroach’s movement. We should like to add something to this. Cockroaches can not only squeeze through tight spots but can also move at an incredibly high speed. This is the exact same principle that’s applied on these bots that also looks similar to that of the roaches. Hence, they are called roboroaches. This project is in development under the UC Berkeley researchers and does bear a lot of potentials. The basic idea is to make a bot that can withstand pressure almost 900 times its weight because that’s the exact way a cockroach withstands pressure. Such type of bots will be pretty useful in search and rescue operations in natural disasters because it can easily squeeze through narrow gaps and take necessary actions.

CRAM is a simple and cheap bot having the size of a palm that has the capability of splaying its legs outward when it’s squashed. The bot is capped with a flexible plastic shield similar to the wings present on the back of a roach; the similarity is not based on looks but mainly in action. Hence, comes the name CRAM that means Compressible Robot with Articulated Mechanisms. The CRAM body is designed with a low friction material and its legs are designed with a relatively high friction material to mimic the pressures tolerated by a roach. Due to the compressible nature of the system, the bot will be able to squeeze through tight spaces and that too at a reasonable rate of speed. Take a look at the image below that depicts this roboroach/CRAM.

What’s the goal of this project?

“In the event of an earthquake, first responders need to know if an area of rubble is stable and safe, but the challenge is, most robots can’t get into rubble. But if there are lots of cracks and vents and conduits, you can imagine just throwing a swarm of these robots in to locate survivors and safe entry points for first responders,” said Robert Full, a professor of integrative biology at University of California Berkeley.

The statement above can easily clarify the goal of this project which would be an effective as well as fast search and rescue mission in the case of a natural disaster like an earthquake where actions need to be taken as quickly as possible to save lives. Its unique feature allows the bot to get into tight spots where human beings or other rescue animals like dogs cannot get into. It’s a noble goal; a project that’s developed for the good of humanity and hence, deserves all the praise in the world.

This short video will show you the concept of this project in detail and this bot in action. We should also tell you that viewers who are quite sensitive to roaches might find it a little disturbing. But if you are not or you can withhold your disgust for a minute, you’ll be enthralled by this video for sure.

So what do you reckon? Roaches run almost in the GOD mode (Unlimited health cheat code in a video game; just a figure of speech)…right? Sure, they do. And now they have helped us to expand the bounds of our limitations which is praiseworthy indeed. Respect for roaches? Certainly not, they are still pests in our household and this indestructible nature of them makes it more difficult for us to eradicate them. Respect for roboroaches? Absolutely! Anything that’s developed for the good of mankind deserves respect and this roboroach or CRAM is made for the exact same reason.