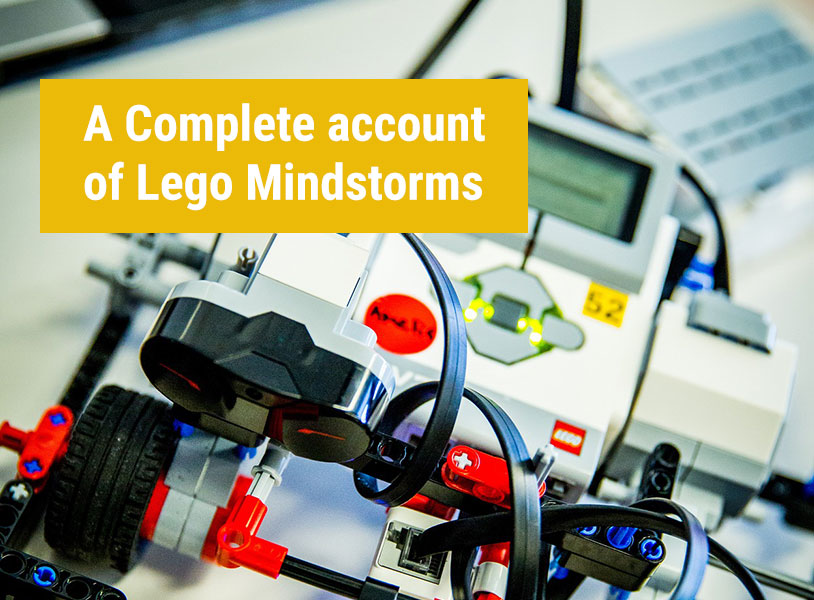 Lego Mindstorms is a series of kits that contain a package of hardware and software to create programmable as well as customizable robots. These kits include a smart brick computer that can control the system, a set of motors and modular sensors and a number of Lego parts to create mechanical systems. Mindstorms Robotics kits are generally sold as educational tools and are sold through a partnership between MIT Media laboratory and Lego. These specific versions are generally known as “Lego Mindstorms for Schools”. These educations tools are GUI-based coding software. Today we’ll go through a detailed account of Lego Mindstorms series like what programming languages are supported by Legos including other 3rd party languages, the various specific Lego kits available in the market and so on.

Programming a Lego Mindstorms system is generally done through a command based programming language. Implementation of actual code is generally not involved. This means that the programs are written through dragging and dropping various relevant command snippets in a suitable position. Hence, the programming interface is very much user-friendly and is perfectly suitable for beginners to pursue their interest in STEM education involving robotics, coding etc.

Some 3rd party languages supported by Legos are:

It’s a programmable Lego robotics kit that was released in 2006. This robotics kit replaced the 1st generation LEGO kits. The kit has a total of 577 Lego pieces and also includes 4 sensors (Sound, Touch, Ultrasonic, Light), 3 servomotors, 7 connecting cables, USB cable and the NXT Brick. The NXT brick is deemed the virtual “brain” of the Lego Mindstorms system. This brick enables the robot to perform various other operations autonomously. The kit supports a graphical programmable environment which enables the users to create and download programs to NXT.  You can go thorugh the detailed specifications here.

As the name suggest, this version of Lego Mindstorms is used for educational purposes and is tailor-made specifically for students or beginners who want to pursue their interests in robotics. The software doesn’t come with the pack and is sold separately. The kit consists of an ultrasonic sensor, a light sensor, a sound sensor, 3 lamps and 2 touch sensors. The 1st set contains roughly 400 pieces. The extra education resource set contains roughly 600 pieces. This educational version is perfectly compatible with older versions. 3 converter cables that come with this set make that possible. The detailed specifications can be found here.

This kit was launched by Lego in 2009. This kit consists of 619 pieces including sensors as well as motors. This kit also contains 2 touch sensors, a Color sensor and an Ultrasonic sensor. The detailed specifications of this kit can be found here.

This is the 3rd generation Lego Mindstorms kit. EV3’s a further developed version of NXT. This kit was released in 2013. The kit includes motors, sensors, EV3 programming brick, more than 550 Lego blocks and IR (Infra-red) remote control. The Lego Mindstorms EV3 can be controlled through smart devices. A number of intricate robots can be made through this kit. We’ll mention some notable ones and will also show you some that can be made by beginners with a little help from experts. The user manuals can also help them out. There are countless step-by-step building instructions available on the internet that can be also referred upon. Some of the notable robots made with the use of Lego Mindstorms EV3 are:

You can go through this article to know about some simple, yet intricate robots that can be made from Lego Mindstorms EV3.