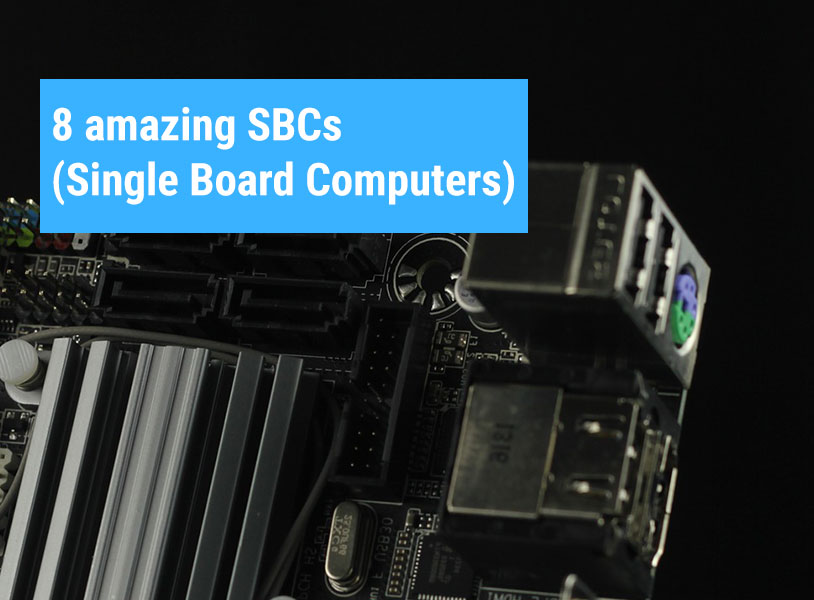 SBC (Single board computer) is an entire computer assembled on a sole circuit board comprising mainly of memory, microprocessor(s), I/O (Input/Output) features etc. Some of these boards are complete computers such as Arduino, BeagleBoard, Raspberry Pi whereas others are embedded as a component of a framework of sensors/attached devices. SBCs are still utilized by professionals but some boards can be used by anyone to know about computers and adopt the DIY (Do-It-Yourself) culture. SBCs can be used in various electronics projects such as robotics, metal detectors etc. Let's take a peek at some popular single board computers.

Raspberry Pi (RPI) is a SBC developed in UK by Raspberry Pi Foundation. The main objective behind the development of RPI was to promote education and implementation of computer science based DIY projects in schools. RPI is said to be a form of “credit-card sized" SBC. RPI can be plugged into a TV or computer monitor and can then be used with a typical keyboard cum mouse. The users can engage themselves in computer programming such as Python, Scratch etc. with this simple “credit-card” sized SBC. Raspberry Pi can perform basic operations performed by desktop computers like internet browsing, playing HD videos, word-processing, making spreadsheets, low-spec video gaming etc. Raspberry pi is available here. It's also relatively cheaper when compared to that of a desktop computer.

Arduino was initially created as a form of design tool by Massimo Banzi along with a few of his friends. Arduino board schematics along with its source code are open sourced. Hence, anyone can manufacture their own versions of the board and can customize the board features as they deem fit. Arduino boards are suitable for all types of electronics based projects involving sensors, cameras, lights and various other machines. You can go through the details of Arduino in this article. Arduino Uno, which is the most popular of all Arduino boards is available here.

BeagleBoard was designed by a number of people in United States that also included some Texas Instruments (a company that manufactures various computer chips) employees. This board was designed specifically for children and hobbyists to help them create various projects based on electronics at a relatively low cost. BeagleBoard is pretty simple and hence, the users can create electronics-based project easily and effectively. This board is open-sourced and is available here.

C.H.I.P. started as a project on “Kickstarter” in 2015. This little board has an implausible amount of ability, taking into consideration its size and price. C.H.I.P. is suitable for students and teachers to get into the maker culture involving various DIY (Do-It-Yourself) projects. The board includes 512 MB RAM, one 1GHz processor, 4GB hard-disk, bluetooth as well as wifi. The board comes with two additional accessories:

The C.H.I.P. software is open-sourced. C.H.I.P. is available here.

Cubit also started on “Kickstarter” like C.H.I.P. in 2015. This is basically a type of plug and play circuit board that also comes with a lot of additional kits. These additional kits include sensors, servos, potentiometers, LED strips, buzzers, small LCD display and more. Cubit is available here. Various kits are available on that website but if you are fairly new to electronics, it's better to go for the Cubit Starter kit.

Onion Omega is a type of invention platform made specifically for IoT (Internet of Things). Onion Omega comes with a wifi and it supports many popular programming languages like Python, Node.js etc. The hardware specifications of this board can be found here. Onion Omega is available here.

MinnowBoard is based on a 64-bit Intel® Atom™ processor. This board is suitable for maker and developer communities and the price of this board is also very nominal when compared to that of a desktop computer. MinnowBoard is open sourced as well and is available here. The specifications and the diagrammatic layout of the board can be found here.

Single board computers are best for students to get into various electronics projects due to their versatility and low price. These boards are suitable for hands-on robotics and coding education. The maker movement is deemed the 3rd Industrial revolution and most of the future jobs would certainly be based on robotics and coding where the maker culture is of utmost importance. So get a SBC and start “making” things to get the best exposure of STEM education. That will surely help you to stand out from the crowd.

Posted by FUTURITE in After School Activities
Tags:computer, hardware