5 tips to introduce Algorithms to Children 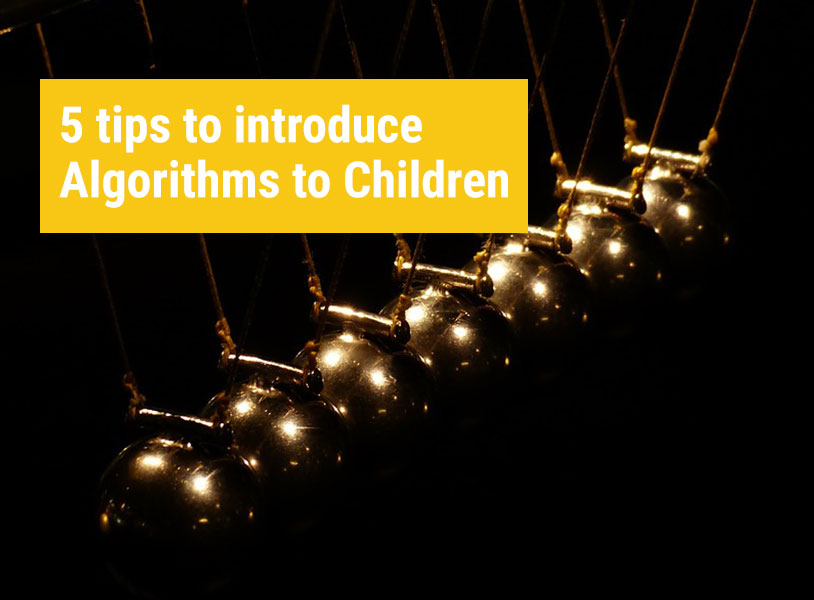 The term “Algorithm” may seem pretty irrelevant to children's education (especially when they are in elementary schools) but it does hold huge importance in the field of programming. Coding has become the basic technological literacy. To write a flawless code, you should know how to write an algorithm first. Algorithms are present all around us, orchestrating everything from technology used by us to the everyday decisions made by us. Algorithms are pretty interesting, considering the fact that the underlying principle behind them is quite simple. It's necessary for your children to have a clear idea of algorithmic concepts before they enter the world of programming. Let's go through a set of stepwise tips to explain algorithms to children.

Explain the basic Definition of “Algorithm” to children

This can be deemed the first step to introduce coding to children. Your children should know the definition of “algorithm” before they start writing one. An algorithm can be said to be a set of detailed step-wise instructions to solve a specific problem or complete a specific task. In computing, algorithms are written by programmers to instruct a computer about the ways to execute a specific task.

Encourage your children to think about Algorithms in a general sense

It's necessary for children to think about algorithms in a general sense to get a better understanding of the subject. Algorithms are present everywhere. A simple recipe to make a particular food-item can be said to be a type of algorithm. The method used to calculate simple problems involving basic operations like addition, subtraction, multiplication and division is also an algorithm. A simple example of an algorithm based on your children's weekday morning routine is provided below for an easy reference.

Walk to the school

Go to the school with parents

You see that this is an algorithm in the general sense depicting your children's weekday morning routine.

Introduce the basic Algorithms used in Computer Programming to children

After your children get accustomed to the basic algorithmic concepts in the general sense, it's necessary that they start thinking of implementing algorithms in computer programming. But remember that this is just the start and hence, their algorithms should be based on simple problems. Introduce them to such simple problems. A simple example can be seen below.

This is an algorithm that finds the sum of three numbers taken as user input.

There are certain techniques implemented for writing good algorithms. Introduce the techniques to your children. These techniques are mentioned below.

Urge your children to write their very own Algorithms

It's necessary that your children start creating their very own algorithms after they get introduced to the basics of the subject. The objective can be very simple. It can be a recipe to cook a meal or it can be one based on mathematical operations as to determine the largest of 3 numbers. Instruct your children to be specific with their instructions as much as possible. Remind them the fact that computers don't have the ability to understand a user's intentions, a user has to specify each instruction to a computer to perform a specific job. For e.g. if you don't ask the computer to bring out a glass first to pour a glass of water, you will end up spilling the water on your floor.