20 Amazing Robots that can be built from LEGO Mindstorms EV3 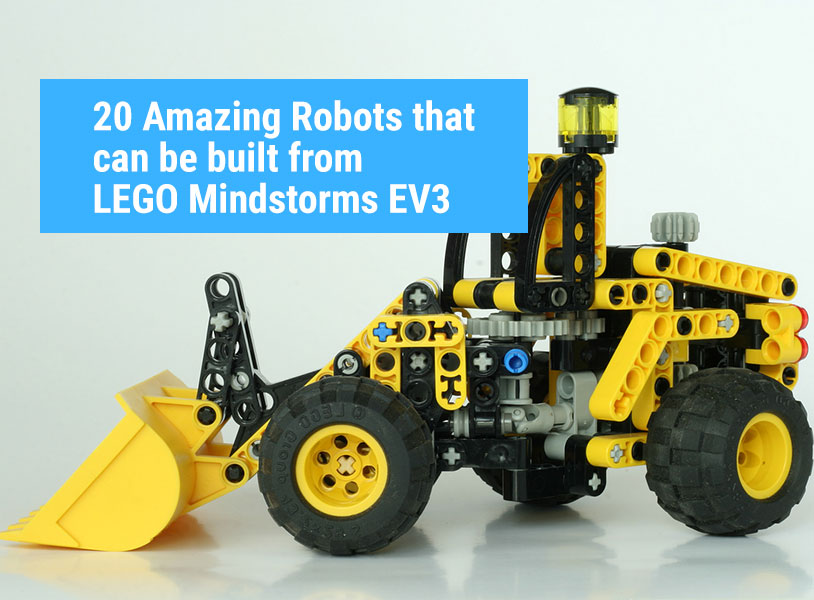 R3PTAR resembles a cobra. This robot can slither on the ground like a cobra. It can snap and strike at the speed of lightning. This robot can be controlled with a tablet or a smart phone. The “Robot commander” app that is necessary to control the robot is free.

The ROBODOZ3R is a type of robot bulldozer. It can be made to be fully autonomous. It can also be regulated using the Infra-Red (IR) beacon. This robot can clear and push things using the bulldozer bucket. ROBODOZ3R has IR obstacle detector sensors that help the bot to avoid running into obstacles.

It is a bot resembling a crawler-mounter and is suitable for all types of terrains. TRACK3R supports four tools:

As the name suggests, this robot has an unstable (crazy) attitude. This is a pretty fun companion. KRAZ3 shows reaction to its bug friend, bearing a IR beacon. The robot can be controlled using custom programs or IR beacon. It can also be simply set to a mode where it follows its little bug companion around the house.

This bot is designed in the shape of a skid-steer loader (bobcat). The BOBB3E can be controlled with the help of a remote. This bot can be moved and it can also be used to lift objects using various controls on the Infra-red beacon.

This robot is a humanoid (resembles a human being) robot. It is controlled by a remote or by a smartphone/tablet. The equipment present are:

The bot has six legs, resembling a scorpion. The similarity is not only in looks but also in action. It has a sharp turning capability. It can snap with its claw and the tail can fire at anything or anyone getting in the way at the speed of lightning.

This bot can be used for organizing the LEGO Technic Beams. The beams simply need to be inserted into this machine. The bot will automatically do the job by detecting their size and colour.

This bot can be used to do some heavy-weight lifting. It has two powerful grippers in front which can be used to grab and lift objects. It can be controlled with the help of a smart phone or tablet.

DINOR3X can be regarded to be a robotic triceratops. This dinosaur can walk and can turn on its four legs.

This is basically a IR remote-controlled truck. The speed of the truck can be modified as well. Addition of gears will make the truck go faster. A trailer that is custom-built can also be added to use the truck like a transport automobile.

How about a little “rock and roll”?  Yes, you guessed it right! This bot is exactly like a guitar and can be played almost like a real guitar. An icing on the cake!

This bot has the capability of following lines of various colors using its light sensors. It can detect objects blocking its way and react accordingly. It can be controlled using the IR beacon. It can also run independently.

It is made in the form of an arcade game. The reaction speed of the player is tested in this game. The bot has a number of disks which it pops up periodically. The player has to hit (whack) the disks as soon as possible with the help of a whack-wheel hammer. This game is fun and can be played with your partner/s.

This bot is made to play various tricks with the player. A red ball comes with the set. It can be hidden under its shell. The IR beacon can then be used to set the level. Depending on the level, the robot will hide the ball with variable degrees of difficulty. The player will have to locate the ball. This game can also be played with your partner/s.

MINDCUB3R is a pretty advanced bot built from the LEGO Mindstorms EV3 kit. MINDCUB3R is capable of solving the Rubik's Cube. The time taken for the solution is just 3 seconds! It's a world record.

It's a smart bot capable of playing the game tic-tac-toe (Xs and Os). The program used to build the bot is EV3 Mindstorms jeJOS.

DIZZ3 is a whirling educational bot. It can be used to teach various mechanical theories of Physics in a funny and effective manner. Certain properties that can be explained through this bot are:

SAPHIRQU3ST is a fully autonomous bot. It has a quest to find the blue colored (Saphirs) objects. A certain time limit is there by which it has to find the objects. The bot keeps on searching for blue objects until the deadline is reached.

These 20 robots are not all that can be built from the LEGO Mindstorms EV3 kit. Improvisations can be done to make as many variations as possible. You can check the detailed specifications of the kit here. A little training on the subject can work wonders. The course INTRODUCTION TO ROBOTICS USING LEGO MINDSTORMS at Futurite delves deeper into the subject and teaches the students that the best instruction manual to build robots using the kit is their own imagination. After all, robotics is that part of STEM where creativity gets unleashed. Therefore, it's necessary to improvise as well as go by the books in order to have an effective and enjoyable learning experience.